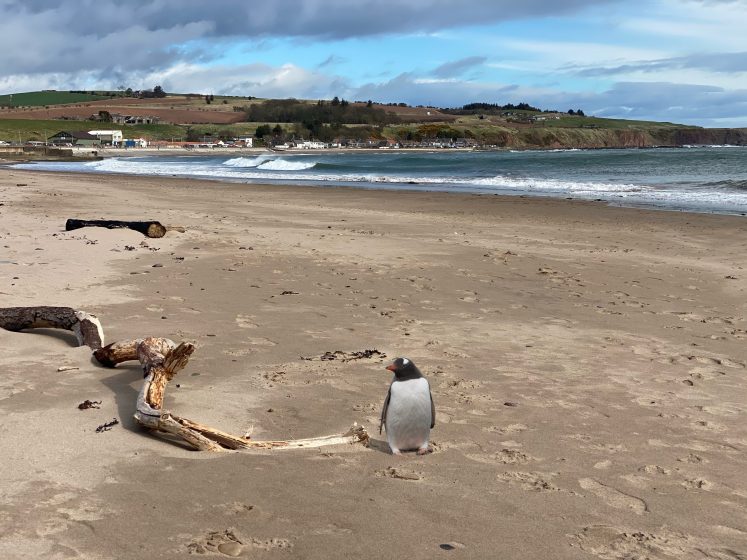 A WOMAN out walking her dog encountered what appears to have been a penguin on Stonehaven beach yesterday.

The surprised local managed to snap an image of the bird, before dropping her phone as her dog tugged on its lead to chase it.

She said: ”It was just after one of those horrible squalls we had, and there was no-one else around. I saw it from a distance and thought is was a guillemot or a razor bill.

”But as we got closer, I realised it was too big – it was about a couple of feet tall.”

The woman who does not want to be named as she fears she will be teased on-line, said the penguin did not look either frightened or distressed.

”It was very strange, it just stood there and looked at me. Then my dog seemed to catch scent of it and started pulling to get at it. I dropped my phone, then managed to lose my balance when I picked it up.

”By the time I had sorted myself and the dog out, the penguin was heading out to sea so the other photos I have are not so good as this one.”

A local ornithologist has identified the penguin as a gentoo penguin – these are normally natives of sub-Antarctic islands. He said the most likely explanation for the woman’s encounter is the penguin has escaped from a zoo. Though unlikely, he said the penguin may survive a while, so it is worth keeping an eye out for further sightings.

Just realised what the date is. Nice one Bellman, do you know what zoo it was? 🤣🤣

That takes the biscuit