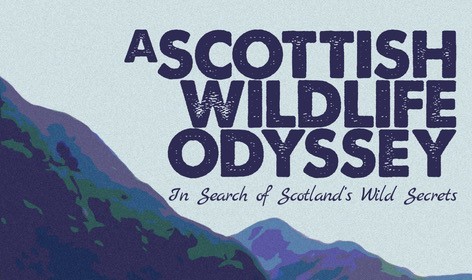 Authored by well-known nature writer Keith Broomfield, and published by Tippermuir Books, A Scottish Wildlife Odyssey is a five-month voyage of nature discovery that includes familiar and lesser-known wildlife locations. It is a personal journey written in Keith Broomfield’s engaging style as he seeks out Scotland’s more unusual creatures, including those found under the sea. Keith’s previous book, If Rivers Could Sing, which chronicled a wildlife year on a Scottish river, was shortlisted as ‘New Book of 2021’ in the Scotland’s National Awards (Saltire Awards).

In his chapter on Fowlsheugh, Keith writes: ‘It is hard to imagine a more absorbing scene of nature’s overwhelming urge to procreate than the one I observed from the top of the towering seabird cliffs at Fowlsheugh, south of Stonehaven in Aberdeenshire. There were thousands of dramas being played out: guillemots courting, razorbills bickering and gulls patrolling for unguarded eggs to snatch.

Fowlsheugh embodies nature’s wild soul, and the noise of the swirling seabirds, the heavy aroma of guano and the sight of thousands of bobbing birds out on the water was totally addictive. This is a seabird city, a place of life and death, and one where one becomes awed and bewildered in equal measure by its sheer vibrancy and clamour.

I adore Fowlsheugh, a wild sanctuary of contemplation, and my heart swells with tumultuous emotion on each visit, an uncontrollable heaving that leaves my mind spinning. Tens of thousands of guillemots, razorbills, kittiwakes and other seabirds nest here, a pulsating mass of frenetic life. Every dark bird dot on the cliff ledges represents a unique individual, each one with their own remarkable stories to tell – of survival and long oceanic wanderings, and near brushes with death. This was a coming together, a once-a-year opportunity to socialise with their kind, and the seabirds were clearly revelling in the joyous reunion.

It is one of the largest and most spectacular seabird colonies on mainland Britain. Three kilometres of red sandstone cliffs rise to over 60 m, with weathering having created crevices and ledges, which are ideal nesting sites for seabirds. The pink blooms of thrift and red campion sparkle along the clifftops and linnets bound along the edges of encroaching fields.’

Commenting on his new book, Keith said: ‘The book is a wildlife travel journey through Scotland, starting in the south-west and then zig-zagging my way across and up through Scotland, alternating between west and east, heading northwards all the while, until the trip end in Shetland. This five-month journey was a snapshot of Scottish nature and a random dip into its deep riches. I hope it will open readers eyes to what a wonderful country we live in. It is easy to take our nature and landscape for granted, which is something we should never do. I also hope it inspires, and if the book leads to even a handful of people becoming more interested and active in nature conservation, then I would be delighted with that end-result. Whilst the book is a celebration of Scottish nature, it also highlights the very difficult environmental challenges we face to ensure we can live a more sustainable future, where both nature and humanity can prosper’.

A Scottish Wildlife Odyssey can be purchased from www.tippermuirbooks.co.uk and from Amazon, other online sellers and bookshops across the UK. Also, available as an eBook on Amazon.