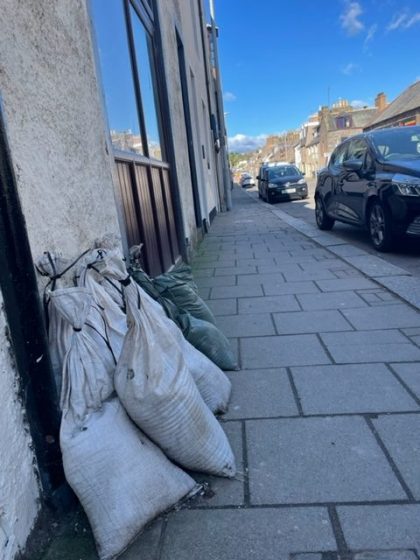 Paddy Coffield introduced the matter saying residents were frustrated by the lack of communication from Aberdeenshire Council. And he said they were concerned about the height of the riverside wall to be built as it was now1.7m not 1.5m as they were first informed.

”It means their gardens will be in permanent shade,” he said.

Catherine Victor said another issue they have is the mess at the front of their houses, which all have doors opening directly onto the street. She called for better sweeping of both the pavements and the road.

As she was also concerned about the height of the wall, Ms Victor said she had spoken to the officer in charge of the project. She said she was advised decking would be installed.

”I want that guaranteed,” she said.

David Lawman suggested a meeting should be held between the council and the householders.

Lil Wood said a meeting would be an excellent idea. She said the residents had been coping with disruption for two years and faced another two years before the works would be complete.

She said: ”We don’t have a back garden, we have a culvert. It is like a war zone with buses, dustbins and lorries.”

Later in the meeting she said the cost of gutter cleaning had increased from £70 to £1,000 due to the difficulty accessing the properties.

”There is water coming in our houses because the gutters cannot be cleaned,” she said.

David Lawman said: ”The residents of Cameron Street are looking for action. We are needing to get the key people round a table with the residents.”

A unanimous show of hands brought the resolution for SDCC to facilitate a meeting between householders, Aberdeenshire Council and McLaughlin Harvey the flood works contractors.

Not being a resident of Cameron Street but a daily user, I agree with the comments. I would like to add that both Barclay Street (bus terminus) are both in a disgusting state with food stuffs, litter, cigarette ends, weeds, blocked drains. t’s a pile up with delivery trucks, buses (sometimes 4 at a time). Pavements blocked with passengers awaiting buses (what else can they do). People standing outside pubs smoking. It’s like an assault course trying to maneouvre your way through. What tourists must think when they arrive off the buses. I never see street cleaners, drains being unblocked or in fact any council workers. Oh and Ann Street – bottom half – weeds up the walls. What is going on??? You phone the council and you are on hold for 45 minutes.

Thank God someone is listening to us residents !Aberdeenshire council is not fit for purpose! I had had flood at front of my flat in 2009 plus two cars – right off’s because they built Fantasy Island up at Green bridge which acted as a DAM when trees came down stream to lodge in large boulders ! River spewed onto Dunnottar and Cameron street ! I was rescued in a dingy by life boat men ! sand bags were kept up hill at Spurryhillock Depot – great news if your sitting in a BASIN !Old Toon was the worst hit and got it again in 2014 by sea storm ! Old folk who were born and bred there were moved by Aberdeenshire council everywhere and anywhere and are still miss placed – if still alive! They have put young lads in these houses – oh dear ! ask older people or police how that is working out ! Rachel Kennedy and her hard working crew have taken stick for this which is so unfair as they are trying their best to get us safe from flooding while Aberdeenshire council are STILL passing houses to build up the hills beside us ! They could’nt run a RAFFLE !!! Yours faithfully. Lil Wood