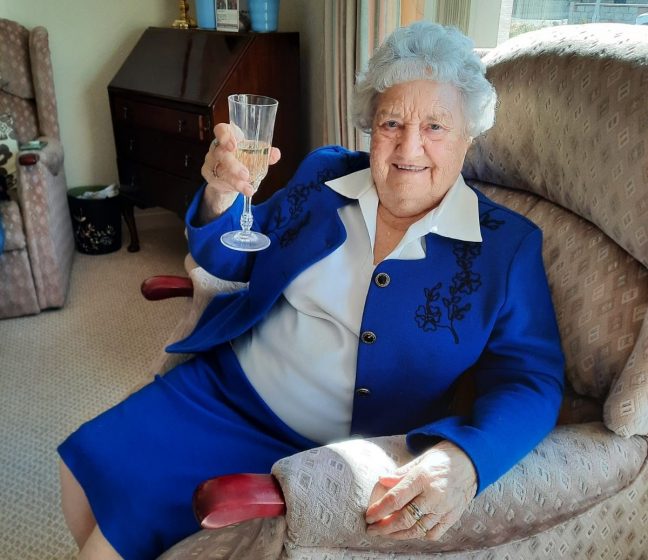 Margaret Simpson, a well-known and popular face in Stonehaven and the wider Mearns community, has died at the age of 91.

Mrs Simpson passed away peacefully at Castle Lodge Care Home in Inverbervie on Saturday, May 14. Joe, her husband of almost 68 years, who also resides at Castle Lodge, was by her side.

The Simpsons had lived in Stonehaven since 1968, most recently at 16 Mearns Drive. The couple were also prominent in the communities of Catterline and St.Cyrus in the 1950s and 1960s, where Mr Simpson was headmaster of the local primary schools and Mrs Simpson travelled widely around the county primary and secondary schools as a Physical Education teacher. Mr Simpson was headmaster at the now defunct Fetteresso Primary then Arduthie Primary before his retirement in 1981.

Originally from Hawick, Mrs Simpson taught at several rural schools over many decades and her last teaching position was at Carronhill School, where she gained considerable enjoyment and satisfaction from teaching children with special needs.

She was closely associated with the Brownies and Girl Guides, becoming Commissioner of the latter organisation in Stonehaven. Mrs Simpson was an accomplished Scottish country dancer and enjoyed teaching that skill regularly in the Town Hall.

A talented sportsperson, who graduated from Dunfermline College of Physical Education, Mrs Simpson was active in Stonehaven Bowling Club and had played in the National Finals in Ayr. She was also a keen golfer, taking on the role of Match Secretary at Stonehaven Golf Club and was a member of the Friends of Stonehaven Outdoor Swimming Pool.

Dear Uncle Joe and Family
We are sorry for your loss. Margaret was a wonderful person who you all will miss.
Her warm spirit and generosity was a joy
Both Margaret and yourself made my
‘Drop by visit’ a lasting memory. Your teaching of my Scots history is retained and joyfully passed along to the next generations. Melissa and Matthew join in expressing our condolences in the loss of Aunt Margaret as wife, mother and grandmother. Love always, Helen