Litter in the Spotlight 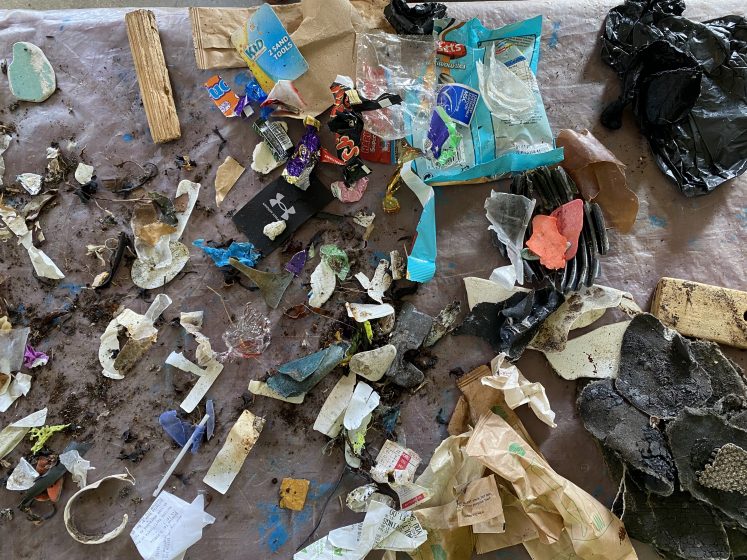 BOTH a Stonehaven councillor and the Horizon Group are gathering information about the litter found around the town and on our beach.

In just one fortnight this month, Cllr Sarah Dickinson picked up over 17kg of litter while out walking her dog. With the help of a spreadsheet, she is now recording exactly how much she bags each outing – and even sorts and records the amounts of recyclable and general waste items.

She said: ”Whenever I walk the dog I am carrying a bag and my litterpicker and I just pick up what I see as I go. A few months ago now, I found a green shopping bag in a hedgerow and now use it to separate recyclate from the residual waste that goes into my blue shopping bag.

”Sometimes these bags can be full to overflowing and my personal bins are always more full of public litter than my own recycling and refuse.”

Working towards tidier streets is nothing new to Mrs Sarah Dickinson, who now now chairs Aberdeenshire Council’s Sustainability Committee. From 2004 to 2009, she was a community councillor and led a consultation identifying litter as one of the main ‘weaknesses’ in the community, with cleaner streets one of the top aims.

This inspired an Adopt-a-Street litter scheme which, at its height, saw over 50 residents volunteering to keep an eye on their street and to pick up any litter they might find.

”I expect people care as much about litter today as they did in 2006,” she said.

”A clean environment makes a difference to us all and can contribute, I believe, to a sense of wellbeing. A clean environment says that we care about where we live and, I would suggest, can help deter people from just tossing something down.”

Meanwhile, a group of Horizon volunteers were out last week undertaking a ‘My Beach Your Beach’ litter count. Run by Beautiful Scotland, this tracks the amounts and types of litter on the beach to build both a local and a national understanding of the issue.

Horizon convenor John Cruickshank said: ” The survey is very detailed and we did take great care with our picking.

”The smallest of items were gathered. Whilst we thought there was not a lot of litter we were surprised at what we did catalogue. It’s mostly small items and consumer related.”

The team from Horizon will conduct further surveys later in the summer to increase the data – and litter – collected.

Meanwhile, Mrs Dickinson added: ”All around Stonehaven there are people picking up litter either a few pieces at a time in the spirit of Paws on Plastic, or more like Steve Smith who does daily picking, or through group litterpicks such as those organised by Horizon.

”Together we make a great team and help to keep Stonehaven looking beautiful.”