Tribute to Heritage and Friendship 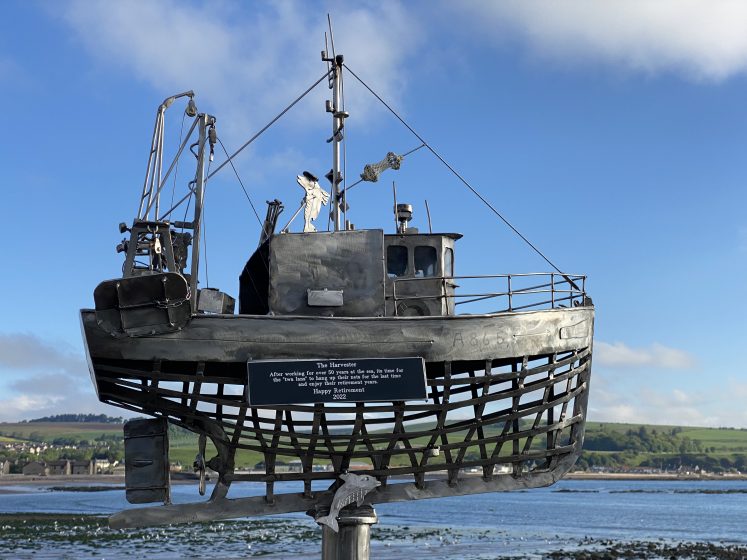 THE latest stainless steel sculpture on the boardwalk was set in place this morning in tribute to a pair of fishermen friends retiring after over fifty years at sea together.

The Harvester set sail from Stonehaven harbour this morning, with owner Ian Balgowen at its helm. It is likely the last time the vessel registered A865 will be seen in the seas off Stonehaven as it is now on a voyage to Wick, to be handed over to its new owner, who will operate it from Scourie, near Kinlochbervie.

Mr Balgowan grew up on a farm and first went to sea in October 1960 on the Loyalty, which sank some 10 months later. Undeterred, he went on to take ownership of a succession of boats: The Brothers, two boats called Sweet Promise, the first being the Gaelic version of the name, and then The Harvester which was built in Mallaig in 1973.

Seeing the boat off at the quayside was Ian Shearer, who joined Mr Balgowan at sea 52 years ago.

Harbourmaster Jim Buchan was also there and described the departure of the fishing vessel as the end of an era. And the boat’s place in the town’s fishing heritage – and the friendship of the ‘twa Ians’ is now celebrated in the usual detailed and quirky style of resident sculptor Jimmy Malcolm.

Jimmy Malcolm said crafting The Harvester took him 156 hours. And, so familiar is he with the vessel, he worked mostly from memory – with the odd trip down to the harbour to have a look.

Locals were quick to inspect the model and note the details – ‘Aye, the kettle’s on.’

And Ian Shearer’s passion for golf is highlighted by a fishy figure about to tee off while his bag of clubs sits behind.

Meanwhile, the two men who must have encountered all the moods of the seas in their decades together, were each quick to pay testament to their working partner.

Ian Shearer said: ”We got on well together, we have done for 50 years. Ian’s got a wicked sense of humour.”

And Ian Balgowan said: ”He’s had some life sentence. He doesn’t deserve one, he deserves two Victoria Crosses – he is some lad, they don’t come much better.”

Hi and a Happy retirement to the two Ian’s,
watched you sailing through the bay this morning and could just imagine how you were feeling.
But lots of happy retirement days is due to the both of you, hope you can enjoy them.
Also good thinking cousin Jim, what a great idea.
Bill and Miriam

Great story and sculpture. I hope the lads have a good retirement