Community
Letters to The Bellman
By bellmannews / June 14, 2022 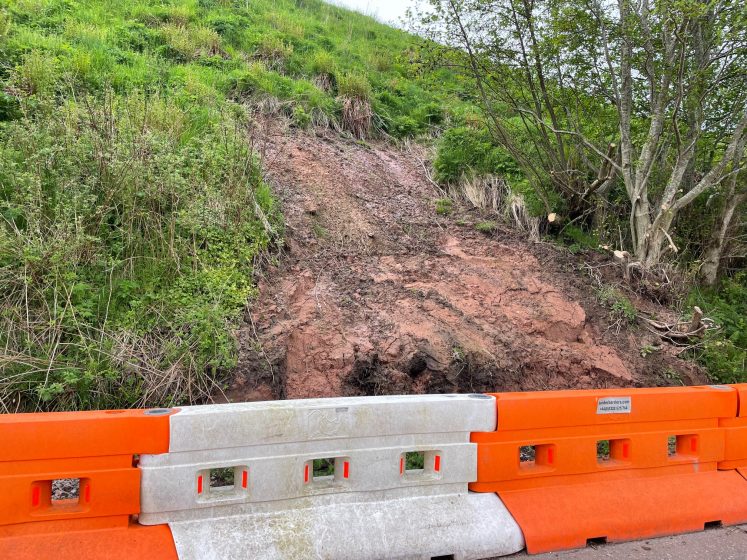 There has been another land slip on Bervie Braes. To my untutored eye, the amount of earth displaced could fill 3 or even 4 wheelbarrows. The earth does not come even near the barriers next to the Braes, but yet, the road is closed. Despite the coming tourist season, the road will probably be closed for the rest of the year. And then, my prediction is that it will be closed permanently. Aberdeenshire do closures well, e.g. the swimming pool at Mackie, probably next the Resource Centre.

Why closed permanently? The excuses will be “frequent landslides,” “expensive to remedy,” “specialist ( and expensive) equipment needed.” And let’s not forget “Covid.” How about putting in some trees which I believe take moisture from the ground, some drains which I believe take away water (assuming the Council bothers to keep them clean) and perhaps even a wall, or at least walls at those bits which are most susceptible to land slip. I am told that in the past, fires were lit to alleviate the problem. Health and Safety would not allow that, as the fire might get out of control and burn the whole country.

We are well served by our local councillors, at least one of whom picks up litter around the Town at about 6.30am. She cares about the Town, obviously, but it seems to me that Council officials do not.

I am told that the “gullies”, or drains at the side of the road are inspected regularly. That may be so, but, to me, there is a world of a difference between regular inspection and regular maintenance. There are several gullies near me where the debris is level with, or close to the level of the drain covers and that has been so for months. I know of someone who, prior to Covid, reported such a drain to the Council. He was tempted to send an anniversary card to the Council, as, surprise, surprise, the problem still existed a year later. For all I know, it may still exist.

I am told that there is a plan to deal with the potholes. To me, there is little evidence of that being implemented. Allardice Street and Dunnottar Avenue do not have potholes. Instead, they have, in many places, no road surface. I am advised that Allardice Street will not be re-surfaced until the Flood Prevention Scheme is finished (year, as yet unknown). That is despite the fact that those putting the Scheme in place have not been working near the Street for months. They are concentrating their efforts on putting the White Bridge back and, from memory, it is not in Allardice Street.

The simple answer would be to close all the roads in Stonehaven, thus making it unnecessary for any tourists to come here and, more important, it would save the Council a fortune, as they would not need even to inspect road surfaces, or drains. Keep your eyes open for this to be an item on a Council meeting agenda!

It is fairly obvious that it is the council’s hope to permanently close the Bervie Braes. Other roads on unstable slopes in Scotland and worldwide continue to be open to regular (and heavier) two way traffic. Not enough effort has been put into maintenance and collaborative engineering solutions.

Well said and I have to say it doesn’t take much effort to plant moisture hungry trees with deep roots ! and it’s only 4k to to paint the barriers a more neutral colour – I’ve done the calcs and work plans just ask . The roads are a complete disgrace. Let’s hope not one trips and sue the council.