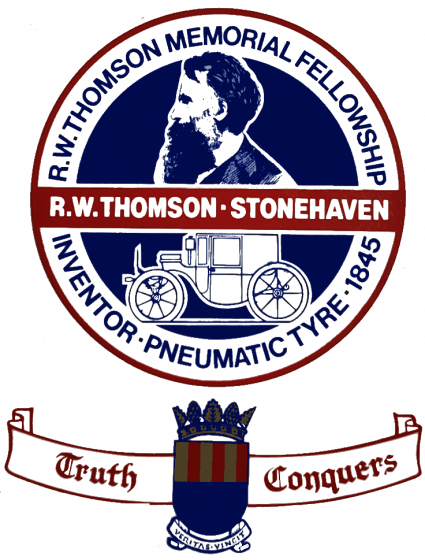 The R W Thomson Memorial Fellowship @RWTMF is celebrating the 200th birthday of a remarkable inventor and engineer. In 1845 Thomson invented the “Aerial Wheel.” He held the UK, French and US patents. Twenty years later he pioneered the solid rubber tyre as fitted to his majestic Thomson Road Steamers.

Robert William Thomson was born in Stonehaven, Kincardineshire, on 29th June 1822. A prolific inventor, respected civil and mechanical engineer, he won the praise of Michael Faraday. After a relatively short life that took him to America and Asia, he died in Edinburgh on 8th March 1873.

The Thomson pneumatic tyre, UK patent 10990, was tested successfully and produced commercially but shortages of rubber and no ready market meant he set it aside. In 1870 he was still trying to source suitable rubber without success, although his own carriage ran on pneumatic tyres until his death. Writing in Wheels of Fortune: A Salute to Pioneers (1938), Sir Arthur Du Cros, Bt., former managing director of the Dunlop Rubber Company, said of Thomson, “He discovered the principle of the pneumatic tyre, and recorded his final specification in a masterly and fully illustrated document.”

Thomson Road Steamers were lightweight, yet powerful, and ran on solid rubber tyres. The agricultural engines met with mixed results but his road locomotives were good, fast, machines and some were used to haul passenger carriages. Exported to Europe, Asia, Australasia, North and South America, the last pair were working in Glasgow in the 1930s. Thomson also invented the portable steam crane. Colonel R E B Crompton, C.B., first president of the Institution of Automobile Engineers, wrote in The Commercial Motor, 27th June 1922, “I am not overstating the case when I say that Thomson [is] the real father of modern road haulage.”

As a civil engineer, Thomson’s method of detonating explosive charges using electricity was adopted in mines around the world. He was employed by Sir William Cubitt and the Stephensons. At the age of 22, however, he set up as a railway engineer on his own account and made plans and surveys for a line in the Eastern counties. Although the railway panic halted the project, the route he had chosen was later adopted by others.

Neil Smith, Fellowship librarian, said, “Thomson was the inventor of pneumatic and solid rubber tyres. A pioneer of mechanised road transport, both passenger and goods, and a railway engineer, he even designed a successful hydraulic dock. Thomson being involved in road, rail and water transport, deserves much greater recognition for his achievements, particularly in this, his bicentenary year.”

Formed in 1975 to co-ordinate the campaign to honour Thomson. The Fellowship took over the running of the established R W Thomson Memorial Rally for vintage and classic vehicles. Held on the last Sunday in June in Stonehaven, his hometown, it has now been running for well over fifty years.