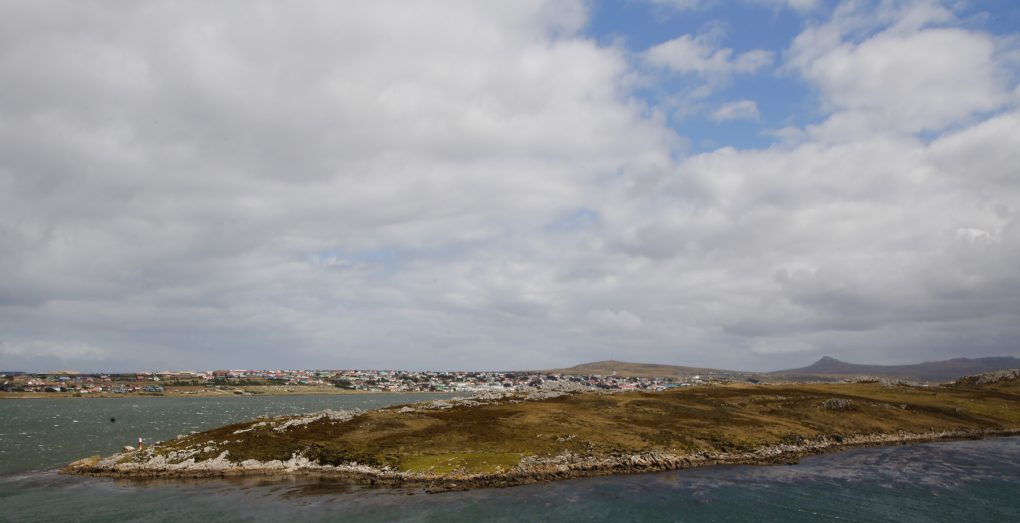 This year, at 11am on the morning of June 18, to mark the 40th anniversary of the end of the Falklands War, pipers around the world will join together in playing a tune composed by a Stonehaven-born piper in tribute to the sacrifices of all those who served in the conflict.

Pipe Major James Riddell was born in 1946 and joined the Scots Guards in 1963, where he took pipe lessons and saw tours in Borneo and Malaya.

And it was with that regiment that he endured fierce hand to hand combat during the Falklands war during the decisive capture of Mount Tumbledown.

Along with Mount William and Sapper Hill, Mount Tumbledown overlooks Stanley – so was of strategic importance during the 1982 War. The heights were held by Commander Carlos Robacio’s 5th Marine Infantry Battalion – a well-equipped, reinforced and highly-trained Argentine battalion, who had effective control of the area.

On the night of 13–14 June 1982, the 2nd Battalion of the Scots Guard with Pipe Major Riddell, joined a British assault on Mount Tumbledown. The Argentinians responded with mortar, grenade, machine gun and small arms fire directed from close range at the British company.

Though the British forces succeeded in driving Argentinian forces from the heights, this close-quarters night battle-long battle of attack and counter attack was undertaken in bleak, freezing conditions. It was brutal and saw injury and loss of life on both sides. The 2nd Battalion Scots Guards had lost eight dead and 43 wounded.

Once the battle was over, the Stonehaven-born Pipe Major earned his place in the history books by asserting the British presence on the summit with a defiant and triumphant rendition of a tune he composed even as the echoes of the bloody skirmish were fading. In doing this he was following the long tradition for Pipe Majors to commemorate actions in which their regiments had been engaged.

“The Crags of Tumbledown Mountain,” was written on the back of a ‘fag packet’. It is now recognised by the Band of The Scots Guards as, ”An ideal musical tribute to one of the finest hours of the Regiment.”

Sadly, Pipe Major Riddell died from a brain tumour in 1997.

At 11am on Saturday 18 June, Peter Hendry will join pipers around the world in playing ,a rendition of Pipe Major Riddell’s battle-hewn composition, to remember the Falklands war and the 40th anniversary of its ending.

And in his own personal remembrance of the fallen at the Falklands, in particular for the Scots Guards, he will be playing two further tunes.

He told The Bellman: ”Firstly I will play a tune called “The Haunting”, to reflect the futility of war and the loss not only of life that accompanies such actions, but also a reflection for what is for me the most poignant: namely the effects war has on the wives, sisters, mothers, girlfriends and sweethearts who have to carry the grief of death and uncertainty, on their own shoulders, at home.

”It is sometimes forgotten, that a wife has to share her husband, when he signs up, with somebody else- namely the unit in which he serves.

”When armed conflict arises, there can be no words to describe the huge sacrifice that then occurs when that second partnership created outside of the family, is shockingly dissolved.”

A lament with a local link

The second tune Mr Hendry will be playing is the lament, “The Flowers of the Forest”, the lament he said is played on the pipes at nearly all Remembrance services around the world, associated with loss of life and associated with the armed forces and serving your country.

”It is therefore a tune I will only play for those killed in battle,” he said.

”It relates to the Battle of Flodden in 1513 where the Scots under James lV (killed in the battle) received their bloodiest defeat at the hands of the English in the history of our nations, up until the time of the Union. It is assumed the tune was composed quite some time after the battle, either by an anonymous member of Clan Skene, or by John Skene of Clan Skene in Aberdeenshire himself, in whose records in the early 17th Century, was found a piece of paper on which was notated the basic melody of the tune.”

And Mr Hendry added a fascinating explanation of a local link to this famous tune.

He said: ”It is particularly appropriate I play it at the War Memorial in Stonehaven, as the land on which it is built, as part of the Dunnottar Estate owned by Lord Cowdray of Dunecht, was gifted to the town by Lady Cowdray, in 1920, though it was not officially completed and “opened” until 1923.

”And this is where the connection to the tune and the location comes into play, for the lands of Clan Skene (out of which the original tune came) butted on to the lands of Lord Cowdray, who in turn added to his own Estate by buying part of the land of Clan Skene.

”So it sounds complicated, but playing at the War Memorial for me, directly unites the origin of the tune, to the place in which I will be playing it.”

Feature image – the approach into Stanley with the heights behind

Thanks for the heads-up and for this excellent article, Jane. Our elder son Ken served in the Falklands much later with the Royal Engineers, extending and strengthening the Stanley runway etc. Although by then not a battle zone like his subsequent tours in Iraq and ‘Ghan, it was still a connection with the Falklands War and it will be a privilege to walk up to the Black Hill for 11am on Saturday to listen to Pipe Major Riddell’s tune wafting o’er his hame toon.

A lovely piece, I am sure Peter will do my dad proud 💙