The Judges are Coming 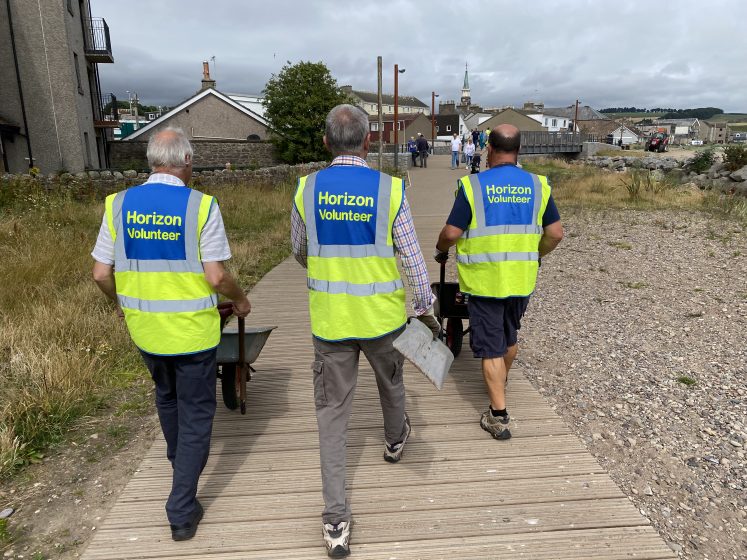 AN ARMY of volunteers is gearing up for a final push to have Stonehaven looking its best when Beautiful Scotland judges visit next Monday – August 8.

The entry is being led by the Horizon Group but, like last year, many of the town’s other groups are weighing in to help including the Rotary Club, Men’s Shed, Friends of Pool, Fatherland Burns Society, Lions, RNLI and Fireballs Association.

And a host of individual foot soldiers are doing their bit to keep the town spick and span including retired fisherman Ian Balgowan now sweeps the boardwalk clear of sand and shingle.

Horizon convenor John Cruickshank said he was delighted with the support being shown for this year’s entry in the competition that encourages both civic pride and environmental awareness.

He said: ”The troops that saw active service last year have re-mobilised and are on manoeuvres armed with brushes and hand tools. If you are out and about, you are likely to see them attending to our final preparations.

”And the lads from Aberdeenshire Council’s landscape services and roads departments are doing a huge amount to help. We will have Stonehaven looking its very best for the judges.”

One area to be particularly scrutinised by the judges is the fireballs-inspired Market Square community garden, which has been entered for the Haddington 700 award. This recognises heritage celebrated through horticulture. Last year, Stonehaven won the award for its Burns Memorial Garden.

”It would be great if we could pull off a second win,” said Mr Cruickshank.

”The Market Square will be be one of the highlights for our judges, as the R W Thomson Memorial team are putting on a special exhibition of vehicles and a display to mark the 200th anniversary.”

Last year, Stonehaven was given a high Silver Gilt award for its entry in the Coastal Town section. This year, said Mr Cruickshank, the mission is to secure a Gold.