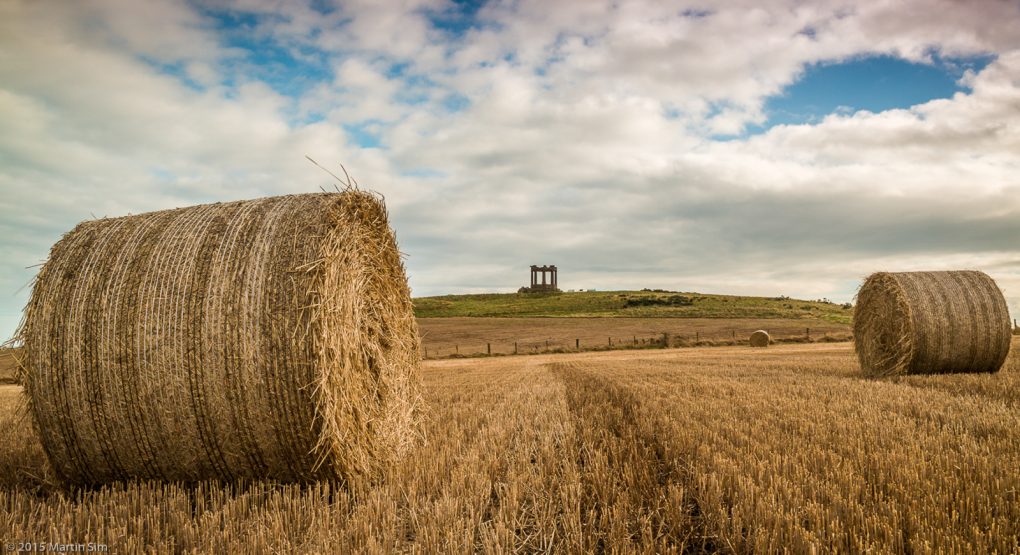 It was designed by local architect John Ellis to look like a ruined temple – possibly to signify the ruined lives of those who’s names are on it. There is no record as to why he designed it to look ruined – no working drawings or sketches. It certainly is very different to most of the other war memorials in this area.

The money to build the memorial was raised by the local community in twelve months through a variety of fundraising events and donations. The Black Hill was chosen as the site for a memorial as it was a popular place for the people of the town to visit – windy but with amazing views up and down the coast and just a short walk from the town. The main part of the memorial is local sandstone, cut from a quarry that existed at the south end of Stonehaven’s harbour.

There used to be 5 iron seats which were made by a local blacksmith and were put in place at the same time. One still exists at the left side of the steps. Another is situated below the memorial to the North West in a hollow. The plastic ones are recent additions but not so comfortable or attractive.

Around the outside of the lintels are the names of some of the outstanding battles of the First World War; Mons, Jutland, Gallipoli, Zeebrugge, Marne, Somme, Vimy and Ypres.

On the inside of the lintels is cut the quotation from Sankey’s ‘Student in Arms’ – “One by one death challenged them, they smiled in his grim visage and refused to be dismayed.”

Our war memorial is unusual in that to really appreciate it you have to interact with it – you can’t see it all from outside – you have to go inside as well. The steps draw you up and you get pulled into it – open the gate and step in – read the inscription – enjoy the view – look out the ‘windows’ each showing a different scene – feel the wind! To the North, up the coast, you can see as far as Portlethen. To the North West you can see the wind farm on the hill called Meikle Carewe, close to the Auquhillies Lang Stane (a tall obelisk with Ogham writing on it – one of the oldest in Scotland), the Nine Cairns and Raedykes Roman Camp. Slightly to the south of that there is the crop of signal masts on top of Cairn-mon-earn. Further south there is the tall Durris TV mast on Craigbeg. To the South there is the amazing ruin of Dunnottar Castle but in Strathlethan Bay, immediately below the memorial, there is a Sea Stack (rock tower) called Dunnicaer where the oldest Pictish fort ever discovered was excavated in 2014 – it dates from the 3rd or 4th century.

Most other war memorials you go up to, read, think your thoughts and come away. Not our one! Our memorial is much more than something to come to look at out of curiosity or interest – it is a view point – a destination in its self – a memorable memorial.

Thanks for your positive response.

Hi Lucy,
How would my images be used? As just general background shots or attached to certain articles?
Martin.

Good Afternoon, I would like to request permission to share your photographs of the Memorial on my Facebook Page Artist of the First World War, please.