The creation of Stonehaven’s War Memorial 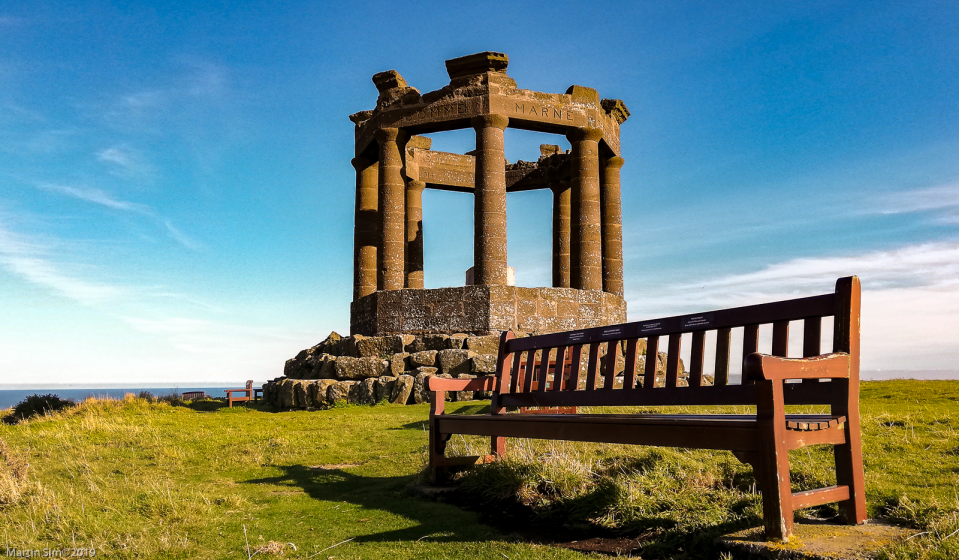 Stonehaven’s War Memorial is a particularly noticeable monument, standing on top of the Black Hill just south of the town. It is often thought of as being in a poor state of repair but this is the way it was designed to look – as unfinished or ruined as the lives of those it commemorates. The plans were drawn up by John Ellis a locally born architect who designed quite a few notable houses in Stonehaven as well as some other war memorials in the area. Mr. Ellis’s choice of design for this memorial created what has become a very strong and recognisable feature in the area and we can certainly appreciate its constant presence on our skyline. Visitors to the area may think it’s a folly, a temple or a mausoleum but they certainly notice it, speak about it and remember it and, surely, that is what it was meant to do.

Stonehaven could be said to have been a little hesitant about its war memorial, as it was one of the last to be built in this area. The process did not start late, in fact the Town Council discussed it in 1917 and again in January 1918, but nothing was decided. By early 1920 comments were appearing in The Mearns Leader, the local paper, about the fact that “In other counties, almost every little village, and every church, has raised some token of remembrance”. In late February, in response to public feeling an open meeting was called and a lot of ideas were proposed and discussed. These included, siting a memorial on the Market Square, as this was a popular meeting place. A Memorial Park or Hospital was also suggested to commemorate the fallen. The Black Hill was put forward as a site for a cairn and park or a rock garden as it was “Where the Men o’ Mearns kept watch and ward over their homes in troubled times”, and, “which has been from time immemorial the rallying ground for defence of the coast”. By the end of the evening, when a vote was taken, the meeting seemed to favour a park in some form. A committee of sixteen was formed and instructed to go ahead and put things in motion.

Months passed. Other memorials were planned and built at Muchalls, St Cyrus, Portlethan, Catterline, Cookney, Durris, Arbuthnott, Fordoun, Banchory, at the local school Mackie Academy and at the various local churches, but not a word was heard or read about the Stonehaven Town memorial.

It would seem as if the issue had been forgotten about, as at a Town Council meeting in April 1921 the councillors were not too sure as to who was on the committee. Discontent and embarrassment about the situation was made very apparent by some of those present. Something must have worked at that or a subsequent meeting because, two months later in July, the architect John Ellis had been engaged and had produced two drawings of how he saw the two main ideas.

They were displayed in the window of Hugh Ramsey, the Drapers, at the corner of Barclay Street and Evan Street. One drawing was for a cross, made in granite to be located on the ‘plain steans’ the paved area at the south side of the market buildings on the square. The other was for a memorial like “a ruined temple” built in the early Doric style of architecture for the top of the Black Hill. The idea of a memorial park or hospital would seem to have failed for various reasons.

After an initial burst of enthusiasm for the cross on the square, the Black Hill plan gained favour and soon had the wholehearted support of the public and councilors. At a rather poorly attended public meeting on Friday 8th July 1921 the plan for the Black Hill was given 99% support and the hope was that building work would start the following spring.

Maybe the population thought that their presence was not required, as everyone was in agreement as to which plan was best, but as the Mearns Leader put it the next week “When one remembers that over 200 men, from Stonehaven alone, gave their lives, it is not very gratifying to know that less than 100 persons – of whom a goodly number were ex-servicemen – thought it worth while to attend,” and “100 persons out of a total population of over 4000 is not creditable to a town whose sons made so great a sacrifice.” The editorial chastisement would seem to have had an effect, but in the wrong way.

The Memorial issue is not mentioned in the paper for eight months, so, on the 3rd of March 1922 the paper fired another broadside stating – “People are becoming impatient about the war memorial. It is four years since war ended and the community has done nothing. Not one single official scheme for the raising of funds has been started or is due to commence.” The paper continued – “ It is twelve months since the public meeting decided on which scheme it favoured but since then nothing has been done except by individuals and societies outside the committee. The public is heartily sick of the situation.”

This piece of editorial would seem to have hit a nerve as, the following week, the paper included: – an engraving of the finished Memorial, an appeal for contributions to the Memorial Fund and a promise to publish a list of all the contributors, but it did add “It will, no doubt, come as somewhat of a surprise to most people to learn that nearly £600 has already been subscribed.“ The report went on to say that the committee felt that as so much money had come in in such a short time, the building work could start as soon as possible. The total cost was estimated at £2000.

When Lady Cowdray, who owned most of the land around Stonehaven, heard of the plan for the memorial on the Black Hill, she made arrangements donate that piece of land to the community. So the way was clear to finally start on the building work.

Once the fundraising started it took off very well with new ideas each week. There were dances, concerts, whist drives, bazaars and a mock trial by the debating society. Personal donations flowed in and special arrangements were made for children to donate a penny per week. A special film show was held at the Queens Cinema in Allardice Street, which produced £17-5/-. The weekly list shows that a pair of stockings raised 7/6d, as did the sale of a bicycle frame. A torch-light procession brought in £5-1/4d, and the list shows “proceeds of pig £3-13/6d.” We are not told if the pig was alive or dead, in one piece or many! Twenty-seven pounds was raised by the sale of articles made by the soldiers at St. Leonard’s Hospital (which used to be a hotel, now a private residence complex).

The regular appearance of these lists no doubt helped to keep up enthusiasm and spur new activities. By the end of March the total raised was £791. In April it rose to £1089, and May saw it clear £1140! After that, however, the pace of fund raising slowed slightly and it took to the end of July to clear £1200. In late September an outstanding contribution of £400 (the largest single amount donated) was given by the St. Leonard’s Auxiliary Hospital Subscribers that brought the total up to £1662. The final £486-7/11d came mainly from Lady Cowdray who donated £300. The total donated was £2148-7/11d and this would appear to have been raised within just twelve months. No mean feat! Especially given the apparent apathy during the previous four years.

On the 31 March 1922 the Mearns Leader reported that there was, “every likelihood of work beginning, in connection with, the erection of the War Memorial in the near future.” The paper also reported that, once started, the building work would not take long and an unveiling would hopefully take place in the Autumn. Something seems to have delayed the plans as it wasn’t until around mid-May that the large granite block for the middle was ordered and, to add to the problems, despite a ‘making rapid progress’ report in June, by late August it seems that the granite suppliers were having difficulty in obtaining the right size of block in the type of stone specified, so the unveiling was put back to the following spring.

The main bulk of the memorial is sandstone and it was quarried locally, more or less immediately below (but not under) where the memorial sits! The old harbour quarry was located beyond where the Yacht Club boat park now is, to the south of the harbour bay. A lot of the houses in Stonehaven were built of sandstone cut from that quarry. There used to be a roadway round to it so getting the blocks out and up to the Black Hill site was not difficult.

The wording on the stonework is unusual and thought provoking. Around the outside of the lintels are the names of some of the outstanding battles of the First World War: Mons, Jutland, Gallipoli, Zeebrugge, Marne, Somme, Vimy and Ypres.

On the inside of the lintels is cut the quotation from Sankey’s ‘Student in Arms’ – “One by one death challenged them, they smiled in his grim visage and refused to be dismayed.” Stirring stuff indeed. Certainly a big step away from the inscriptions on some of the other memorials that seem to lack any inspiration or individualism.

Finally the day arrived- Sunday, 20th May 1923, at 3 o’clock. The unveiling and dedication of Stonehavens War Memorial. A procession formed up in the town square some time before the appointed hour. It consisted of ex-service men, territorials, the Provost, Magistrates, the Town Council, Church Councils, the War Memorial Committee, various other public bodies representatives and a pipe band from Aberdeen.

They set off from the square and marched through the town up to the Black Hill via the Bervie Braes. Relatives of the fallen were accommodated in a special enclosure to one side of the steps that lead up to the gate of the Memorial. Eight sentries were posted outside the memorial one at the base of each pillar their rifles reversed out of respect. There followed the dedication service with hymns and speeches and Lady Cowdray performing the unveiling. Then a wreath was laid and the last post was sounded followed by the National Anthem. A poem composed specially for the memorial by Prof. John G.McKendrick of Maxiburn, Bath Street was read out at the very end of the service.

So eventually Stonehaven got its amazing unique memorial, unlike any other, but a credit to all the people who helped make it happen as well as to the names of those who are on it.

My thanks to the Mearns Leader for granting me permission to use their material and The Stonehaven Heritage Society for allowing me access to their archives.

The Stonehaven Heritage Society’s records show that Alexander Adamson, Builder and Cement Worker, Garvock Street, Laurencekirk was paid £1175 for the building work. The descendants of that builder still stay in the area. At the time of writing the company is still in existence but under new ownership.

The Red Swead granite block (which is white) for the center, weighs 10.5 tons and was supplied by Bower and Florence, The Spittal Granite Works, Aberdeen and cost £291:13/6d.

Four thousand and ninety nine lead letters were needed to make up the one hundred and sixty two names and cost £170-15/10d.

There were five iron seats placed round the sides and they cost £3 each and were made by Allardyce the blacksmiths in David Street. £47- 10/- was paid to James Burnett & Sons, Sawmillers for the wire fence, posts and gate to surround the whole area.

William Fife who stayed at 43 Cameron Street was the Foreman Mason on the project.

The memorial is not aligned to the points of the compass – it appears to be offset by 52 degrees.