They Went The Distance 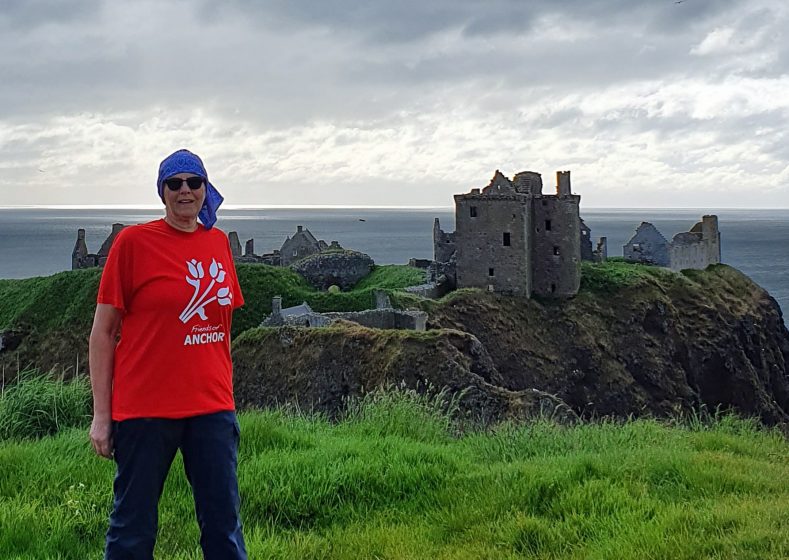 STONEHAVEN may have been on lockdown, but that didn’t stop two local ladies from taking their daily exercise on behalf of a good cause.

Both Mary Marr and Linda Johnstone took part in Going the Distance, a fundraising challenge for the Anchor Unit, where supporters were asked to collectively travel the perimeter of the North East of Scotland.

Mary, who is a volunteer conductor with the land train, spent the first week in June following the route of the Stoney Express, and cycling 40 miles in the process.

”Despite the uphill challenge it was a very enjoyable journey, we are so lucky to live in such a beautiful coastal area,” she said.

”On one occasion I had a friend come along with me as my ‘carriage’, she took me on a detour to see the Plague Stones which I hadn’t seen before.”

The Anchor Unit is a cause dear to Linda’s heart. Her husband Alex Johnstone, the MSP for North East Scotland, died of cancer in 2016

Linda was diagnosed last year with Myeloma and Amyloidiosis – two cancers of the blood. She has undergone chemotherapy and recently had a stem cell transplant and is shielding – but that didn’t stop her joining the challenge.

”I gave myself a target of 100 miles and, being a shielder, a lot of my miles during the first half of the month were done very early in the morning, ” she said.

”However, I passed my target finishing on 182 miles, which is like from Stonehaven to Berwick – with all of these miles being done within the vicinity of Stonehaven, be it Dunnottar, Fetteresso, Ury or Skatie shore. I even did a few miles on my bike!”

With supporters like Mary and Linda taking part across the region, ‘Going the Distance’ proved a huge success, with participants covering a total of 92,858.265miles. That’s 35 laps of the North-east, or just over three and a half times around the world – and they raised over £43,000 for the Anchor Unit in the process.

Linda Johnstone is pictured taking a breather at Dunnottar Castle

The final donations are in and the fundraising certificates are in the post… our Going the Distance challengers raised an incredible £45,629.11!!

We are simply blown away by the enthusiasm, commitment and creativity we saw throughout the month of June, as our 650+ participants walked, ran, cycled, skated, rowed and even swam, through every kind of weather, to clock up nearly 100,000 miles – lapping our original target of 2,600 miles more than 36 times

In a year where we have been unable to proceed with any of our fundraising events, we hoped this virtual event would bring a new sense of purpose to those daily outings, while raising a few funds for the charity. The success of Going the Distance is down to the amazing people who took part and those who supported them every step of the way. None of this would have been possible without you. Thank you all so much for your phenomenal support