We Should Have Asked For More 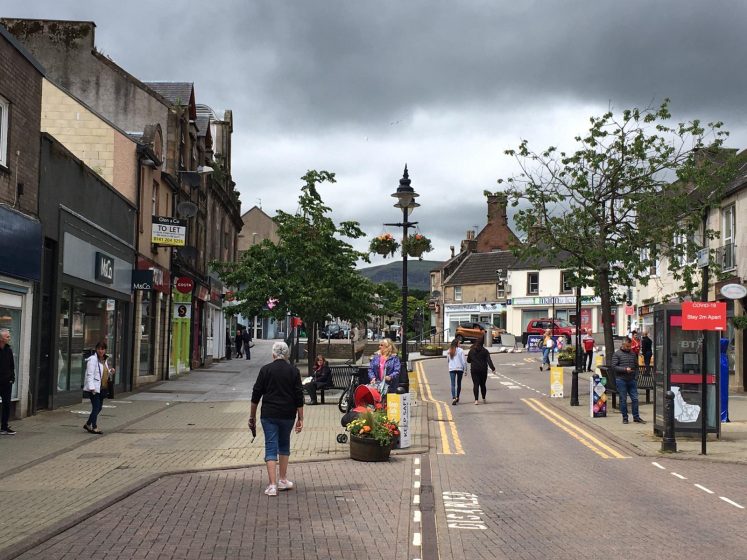 AN ONLINE petition is calling for the removal of at least some of the cones lining the town centre – Aberdeenshire Council have said this may be possible, but only after a review of the impact returning school pupils have on the streets.

And one councillor last week said she was unhappy Aberdeenshire Council did not apply for more funding from Sustrans, the charity encouraging walking and cycling and managing the Spaces for People fund on behalf of the Scottish Government.

The thorny matter of cones in Stonehaven was the subject of a long discussion at Tuesday’s meeting of Stonehaven and District Community Council, which was held via telephone conference.

Three of our four councillors were in attendance: Wendy Agnew, Sarah Dickinson and Dennis Robertson (Sandy Wallace was not present).

Cllr Dennis Robertson reminded everyone the cones were put in place as, ‘a public health measure to widen the pavements where there is increased footfall and to enable safe distancing’.

He said the wider pavement was also intended to facilitate those in wheelchairs or with prams – allowing others to step aside.

Cllr Dickinson later added the cones were intended to allow people to come out safely and to encourage active travel.

But Cllr Wendy Agnew made it quite clear she had been unhappy with the measures from the outset.

”Everyone knows what I think about this,” she said. ”We didn’t need to have barriers, we could have applied for other things.”

Mrs Agnew went on to say the Sustrans website showed other local authorities had received far higher sums than the £310,000 achieved by Aberdeenshire.

Nestrans has awarded almost £30 million to Scottish local authorities and once other bids are assessed this could reach £38,251,168. The amount received by Aberdeenshire, £310,000, is one of the lowest.

It is easy to understand why a large city authority like Glasgow received over £7 million. But why £595,000 for Dumfries and Galloway?

Mrs Agnew said it had been officers (local authority employees) who decided to use cones and water barriers.

It was later revealed by the councillors these were expedient to use as they were already in the depot in the town.

”We could have applied for other things,” Mrs Agnew said. ”It was an officers’ decision, that is the problem. I am not happy at all.”

She later added: ”We could have asked for more and got more, instead of annoying businesses.”