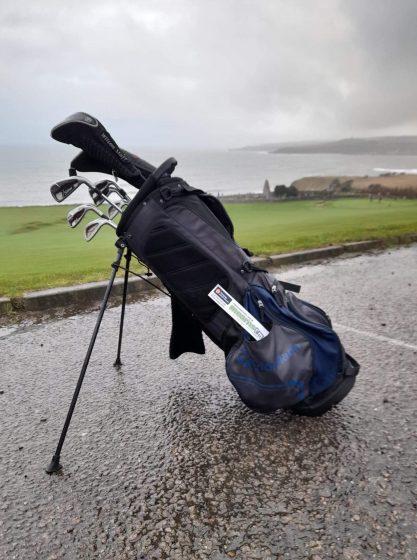 This weekend marked the third round of the Russon/Douglas assault on the Stonehaven Golf Club winter league doubles competition (quite a mouthful) and for the first time Douglas actually showed up. He needn’t have bothered mind you, his rustiness contributing towards an inglorious combined score of 70 which leaves us in ninth position, or, in other words, last.

The portents weren’t good as Douglas arrived barely two minutes before the allotted start time, waddling down the pathway looking like the Michelin Man. Admittedly the weather was somewhat fresh and the temperature low, but Douglas wore enough layers to venture an ascent of Mount Everest. After a couple of holes he was radiating enough heat to power Spurryhillock Trading Estate, his playing partners having to stand twenty yards back for fear of scorching.

Wearing ten layers of clothing is not conducive to quality golf and as a result Douglas toiled. Our playing partners (Duncan & Wood) dovetailed nicely however, taking it in turns to to contribute, while I was left to take almost full responsibility for our scorecard over the first nine holes. Douglas birdied the 5th, commonly considered the easiest hole on the golf  course, but offered little beyond this, while I birdied the course’s signature hole (7th) and littered our scorecard with solid pars.

The back nine found me running out of steam a little and I handed the reigns over to Douglas but he failed to step up to the plate, his attire continuing to impede his golf, as did news via his iPhone of each goal Rangers scored against his beloved Aberdeen (final score 4-0).

Our playing partners scored impressively apart from a grotesque 14th hole which saw Ian dump his tee shot into a gorse bush and Kenny fluff his lines from a bunker. Momentarily we’d brought them down to our level but they restored order with pars all the way in while we contrived to bogey 16 and 18, unforgivable golf which included a second shot from Douglas on 16 which almost departed the golf course down by the third green.

The highlight of the round was all four of us finding the dance floor on the 11th in two shots with the lowlight coming seconds later, after we’d completed our high fiving all the way up to the green, when not one of us managed to hole the putt.

It’ll be different next week, I’m bringing my A game, so is Douglas, and provided he doesn’t dress like he’s tackling K2’s summit, we hope to post a sensible score at last.