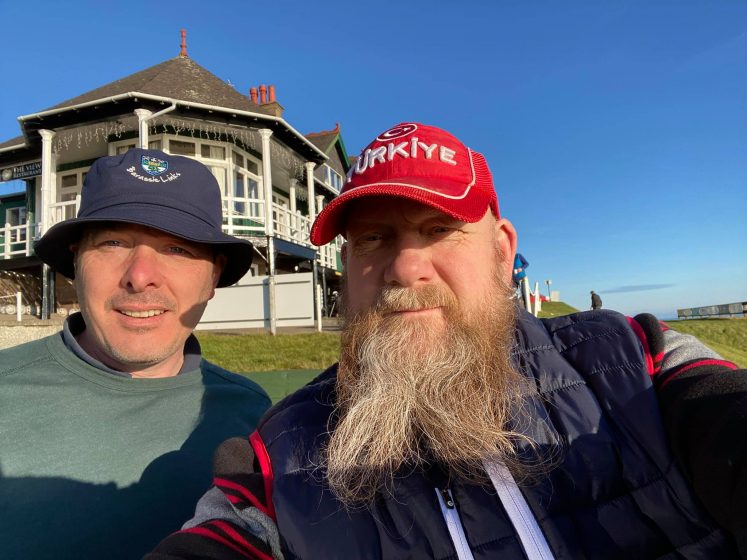 Russon & Douglas’s spluttering start to the winter league doubles competition can be attributed to only one man, Keith Douglas, given he didn’t bother turning up for the first two rounds and was barely noticeable in round three. It was pleasing therefore to find him step up to the plate this week and deliver a performance of note, contributing strongly to our team score of 61. He was found wanting on several occasions but largely pulled through and we can only hope he continues this form through the month of December. First though he needs to repair his golf trolley. It’s all very well having the swankiest one in the district but if the handle snaps off the damned thing on the first tee it’s no use to man or beast. I keep telling him that proper golfers carry their bags, you should sling your weapons over your back not transport them around the gloaming upon a trolley that belongs to the Starship Enterprise.

The winter league is very popular at Stonehaven Golf Club and there are plenty of entrants. It isn’t for everybody however, chiefly because the very title puts the less hardy golfers off, suggesting golf in freezing conditions with icicles hanging from their nostrils. The truth though is we’ve enjoyed beautiful, benign conditions so far this season and it’s been a pleasure to stomp the green fairways of Stonehaven beneath largely cloudless blue skies. The air is fresh, the views beautiful and it can feel like the most tranquil place on earth. The only drawback, and it’s somewhat churlish to mention it, is that you play the last three holes directly into the glare of a low setting sun and for that reason I messed up the closing section of our round. It was time then for my low handicap partner, Keith Douglas, to stand strong for the team, but he fluffed his lines with an amateurish bogey on 17, chunking his chip and allowing it to roll apologetically back to his feet like a naughty dog, tail between its legs, being called back by its master. This embarrassing farrago rather took the gloss off an otherwise excellent team score.

Our playing partners were Messrs Duncan & Wood who played adequately without setting the heather alight. If their golf were a Premiership football club it would be more Crystal Palace than Liverpool, grubbing along unspectacularly, accumulating points here and there but entertaining no one in the process. Had tickets been sold, the stadium would have been only half full at the interval with many more drifting home long before the final whistle. It was less champagne and more meat and potatoes golf. Step it up next time please gentlemen.

We’ll all be back for more punishment this weekend. The unofficial Mearns FM duo competing for the honour of Winter League Doubles Champions 2021. We’ve still to arrive at a team name, Mearns FM Marvels seems appropriate for 50% of our team, Mearns FM Muppets for the other 50% until he gets a handle for his supposedly all singing and dancing golf trolley. And buy yourself a razor Douglas, how am I meant to putt when your beard’s shadow falls all over my line?