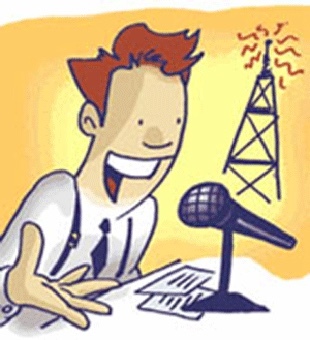 Mearns FM has long been the town’s community radio station and these days broadcasts much further afield than Stonehaven. The advent of DAB radio and online listening affords lugholes the world over access to MFM’S output, there are listeners a’ ower. The station prides itself on local content, boasting a stable of two dozen presenters who reside in our precious north eastern pocket of Scotland. It also has a handful of presenters from more distant parts and today we find out about one of them; Nigel Bassett.

Nigel regularly presents the midweek breakfast show from his home studio in southerly climbs, you’ll find him every day from 7am through the week (except Thursdays). Here’s a little more about him…

How would you describe your show and what type of music do you play?

I’m into anything lively be that rock n roll, country, punk or whatever, new or old. I’m into my sixties but have never grown out of my thirties really, there’s life in this dog yet!

My show is mostly about the music but I like to natter in between tracks, discussing news headlines, sport or anything amusing that’s cropped up in that morning’s news. I don’t go into too much depth with national news, that’s for the specialist news channels.

What’s your  favourite band and concert?

I was spoilt in the early 80`s when the nearby Cornwall Colisseum hosted all the top acts. I saw plenty of bands; The Skids, David Essex, Madness, Mike Oldfield, Motorhead and loads more but my favourite gigs were Status Quo and Slade, I saw them both several times. More recently I’ve seen Bryan Adams, he was good, the Eden Project (also on my doorstep) have had some good gigs too, Blondie for example. I don’t have what you’d call a ‘favourite band’ but would love to see The Killers play live.

Is there a band/type of music you couldn’t bring yourself to play?

Top of the list would be Radiohead. What’s that all about?! Also soppy love songs only get played through gritted teeth and upon request.

How long have you been at MFM?

I started in April this year, so nearly 9 months.

Have you had any other broadcasting experience?

What was your day job?

I served an engineering apprenticeship and ran a couple of pubs in the 90’s, but my main job was driving heavy machines. My dad had a small plant hire company with JCB’s and the like, I learnt how to drive them at an early age. Illness forced me to give up work in 2003 when I was a supervisor for a company excavating for the Electricity Board (putting up telegraph poles, laying cables etc).

Tell us about your family?

I’m single after 2 marriages and have two children (Simon 32 and Toni 29). I’m a grandfather of four and my Mum lives just a few miles from me.

Do you live in Stonehaven and are you from the area?

I couldn’t be further away while still residing in the UK! St Austell is 650 miles away from Stonehaven, I live a stone`s throw from the famous Eden Project and Land’s End is 50 miles west of me. Community radio depends entirely on volunteers and when the opportunity to join Mearns FM came up, I was delighted to accept. The people there have made me part of the community.

Next week we hope to enlighten you about Monday and Friday evening presenter Brian Davie, it all depends on how heavy his Christmas proves!