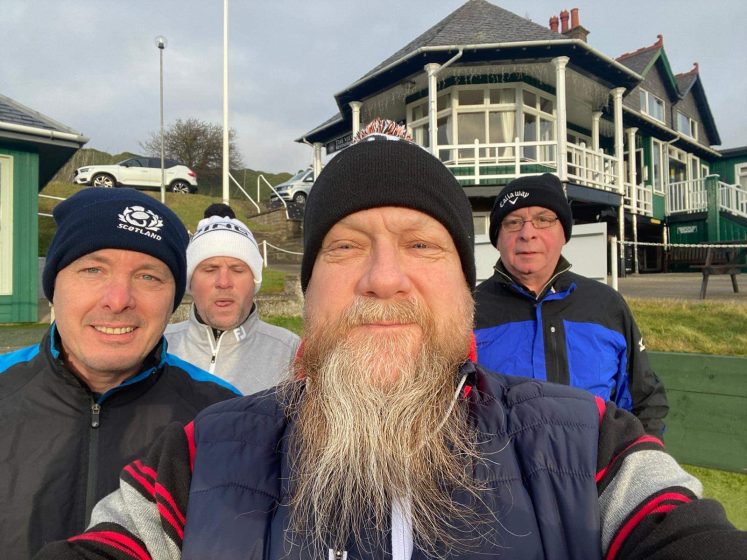 According to common maxim, 95% of a golfer’s fortunes depends upon that which is occurring between his or her ears during a round of golf. Provided a player possesses the basic fundamentals of a golf swing, the scorecard will, in large part, reflect the mindset deployed whilst that individual was on the course . This week’s winter league round 7 proved a perfect example of that axiom.

My doubles partner, Keith Douglas (the goon with the beard in this photo), is a good golfer. There I said it. He plays off a handicap of 3 and demonstrates an unruffled approach to golf which rarely finds him flirting with danger. He goes about his business diligently, with the minimum of fuss, collecting pars with gay abandon and only the occasional blemish sullies his card. However, and this is where the head funk reference comes in, put him on the 14th tee at Stonehaven Golf Club and the game’s a bogey, he turns into a quivering wreck. It’s bizarre. This otherwise highly competent, unflappable golfer who consistently breaks 70 at Stoney, becomes a hacker of the highest order for one hole only. I’ve seen him slice the ball onto Skatie Shore, sky it out of bounds, dump it into gorse and pull it into no man’s land. His tee shots off the 14th are as grotesque a sight as anything you’d see a beginner inflict upon your peepers and it happened yet again this week, his tee shot threatening the life of dog walkers on the beach below. It can only be attributable to a paralysis of analysis between the ears, that golfing mind funk which afflicts us all at one time or another.

Unfortunately, my occasional stinking thinking rears it’s ugly head also, and I chose the very same hole as Keith to demonstrate my brain fade, although gratifyingly with less disastrous results. It’s a team game, the best score on each hole counting towards the team scorecard, so when Douglas fluffed his lines with a monstrous hoik out of bounds, I needed to step up. The first part of the operation I negotiated with aplomb, a splendid tee shot coming to rest a mere fifteen feet from the hole. But, fatally, between tee and green, as I strode the short fairway in pensive and negative thought, I talked myself into a three putt. As soon as I stood on the green I couldn’t wait to get off it and instead of striking a confident, gutsy birdie attempt, I dollied a pitiful lag two feet short then proceeded to muff the tap-in, horseshoeing the damned thing around the hole and leaving it above ground. I thought I was going to vomit. Unforgivable golf, and all because my muscles had listened to what my weak mind had instructed them to do. Pathetic,lily livered, lamentable timidity. Stomping to the next tee, steam coming from my ears, I looked up for a word of consolation from my doubles partner, but there was none, just a dismissive shake of the head and a volley of abuse (from the man, I remind you, who didn’t even complete the hole given his abject fear of it).

Anyhow, despite our mutual farrago on fourteen, we managed to record a creditable 64 from eighteen holes of golf, representing our best effort yet in seven attempts. We’re a long way behind the front runners but it’s not over till its over and hope springs eternal etc, etc. Hold on, who am I trying to kid? We’re also rans this year and no mistake.

The company was good, Brian Hardstaff proving an even bigger wind up merchant than our good selves, ably matched in this regard by our other playing partner, Willie Donald. The cheek kept coming, as did the biting cold with the four of us manfully completing the round despite Baltic conditions, a light frost accompanying us throughout as we battled the elements beneath four layers of clothing. One of the benefits of winter league golf is playing with folk you might never ordinarily play with. It’s a joy chewing the fat with fellow members as you share three hours of golf in the prettiest of settings. That said, quite what people make of the Douglas/Russon combo is anyone’s guess. We’re not everyone’s cup of tea since we don’t take the game terribly seriously, so it’s rare for people to put their names alongside ours twice. We’re running out of people to mark our card. It’s a relief that new covid related club rules allow us to mark our own or we wouldn’t be completing this season’s winter league at all.