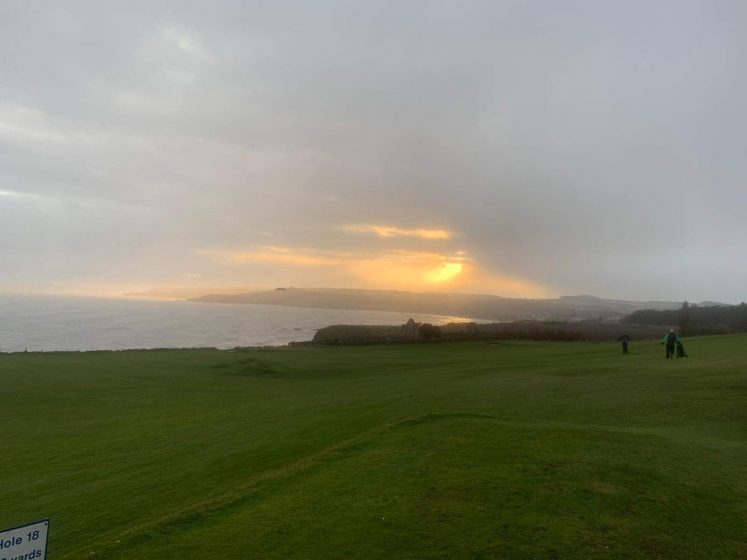 I used to be an amateur footballer back in the day, not a very good one, but a footballer nonetheless. When my career drifted to a close I was to be found on the periphery of the squad, rarely getting a game unless someone had gone down with the effects of a bad curry. Occasionally, I’d pitch up to watch a game from the sidelines only to be asked if I had my boots in the car, perhaps Frankie would have a dose of the squits or some such. Well today’s golf outing reminded me of that experience, not that I replaced anyone who had the trots, just that I turned up expecting a casual bounce game but found myself thrust instead into the heat of winter league battle.

Unbeknown to me, the winter league weekend fixture had been extended to include Monday’s play so before I knew it, I had a scorecard in my hand but no doubles partner to share it with, my winter league partner working. I’d be flying solo in terms of submitting a ‘team’ score but was joined by my good friend Brian Davie and two other winter leaguers; Steven Guzik and Chris Brown. Pleasantries were exchanged, opening drives executed and away we went on a bitterly cold day.

Sadly, we were playing on winter greens, a member of the committee deciding that the summer greens required a rest after a battering from the weather. This was an extremely disappointing turn of events. The art of putting is my favourite aspect of golf, the only facet I’m any good at to tell the truth, performing on conventional greens for me therefore is a must. Imagine my despondency then, to learn my enjoyment was to be ruined by the mean spirited actions of a committee member who’d decided (no doubt from the comfort of his armchair, bedecked in smoking jacket, reclining before a roaring fire and swirling cognac around a glass which was sat snugly in his right hand), that all must suffer simply because he reckoned the greens needed a breather. I’ve no desire to embarrass the individual in question, or indeed spearhead any kind of lynch mob, that would be most unsavoury, so let’s protect his identity by using just his surname; Wood. No, on second thoughts, I’d best use his first name in case his surname gives the game away; it’s Ian.

I only hope this individual feels able to sleep tonight having ruined the sporting pleasure of upwards of a hundred willing golfers who’d assembled themselves in anticipation of a pleasant round of golf, incorporating standard greens. It looked for all the world, to anyone with a functioning set of peepers anyway, that the summer greens were playable but oh no, Billy Bigtime comes swaggering into town to spoil everyone’s fun. It’s come to a pretty pass when committee members get a kick out of ruining the festive period for the paying members whom they’re supposed to serve. I bet he used to take his football home when he was a kid, leaving all his mates without anything to play with. That’s if he had any mates. Which I doubt. It takes a really mean spirited individual to torpedoe everyone else’s festive spirit by switching to winter greens on a treasured bank holiday Monday shortly after Christmas. Talk about bursting one’s bubble. I propose to write a tersely worded letter of complaint to the committee but will no doubt be met by a kangaroo court replete with said individual’s cronies. So much for democracy. Pah.

But let’s not be bitter, that’s unbecoming, instead we’ll turn to the golf itself and in particular the exploits of Messrs Guzik and Brown who shot the lights out with a 62. An impressive total on the face of it yes, but don’t be fooled. You don’t always get the full story behind a scorecard do you? Well on this occasion I can offer you the benefit of a ringside seat so let me spill the beans.

There’s good luck and bad luck in sport isn’t there? For example, returning again to my hapless football career, I scored ten goals in my time as a robust centre back, five at the correct end and five into my own net. The goals I scored at the right end fulfilled the law of averages; if you turn up for enough corners in the opposition penalty area you’re bound to get the odd header bounce off you and beyond the keeper. My goals were therefore, I admit, more luck than design. Equally, when you’re a defender, you can’t help but suffer occasional bad luck as your attempts to repel crosses sent into your box are diverted past your own keeper’s nose, and I was guilty of this on five occasions. How apt, my football career levelling out to nothing with five goals having been notched at both ends.

Well, golf is similar. Chip the ball towards the hole a hundred times and the odd effort is bound to drop fortuitously into the cup, and today such an outcome came to pass for Steven Guzik, not only once but twice. With the aid of a golf mat (rules conveners yet to verify its legality), Steven delivered the ball into the hole, twice, from a distance of twenty yards or more, both times with shots that on another day would have skittled past the hole and off the green. With us playing on winter greens the grass was somewhat longer which slowed down the speed of the ball, and given the rain we’d had, his ball would land deftly upon the turf as if plopping into a suet pudding, barely progressing beyond its landing zone. It would be churlish to suggest his chip-ins on the 13th and 16th weren’t reasonably well executed but at the same time, the element of luck far outweighed the element of skill, if Steven wouldn’t mind me saying so. Regrettably, his reaction to both flukes did nothing to advance the game of golf as a gentleman’s sport, his immodesty in full glare. There’s a time and place for moon dancing and yelping out loud as if having won the lottery, a golf course is not it. It would appear the etiquette rulebook has yet to make an appearance at the Guzik residence since, in a vulgar display of braggadocio, his playing partners were subjected to behaviour belonging on the football terraces, thin air being punched as he strutted around the green as if parading on a catwalk. Perhaps if his playing partner, Chris, had bought him a dictionary for Christmas, Steven might have had the opportunity to look up the word ‘decorum’ and demonstrate its meaning rather than prancing around like a peacock on heat.

Nevertheless, his birdie and eagle were significant accomplishments, contributing in no small measure to an impressive total of 62, a score which might yet aid their progression into the final. Steven’s partner, Chris, weighed in admirably too, his putting somewhat suspect but forgivable given Wood’s inexplicable decision earlier in the day to deny participants the use of standard greens. (One doesn’t like to harp on or bear grudges but I’m tempted to put a call in to a couple of mates I have in a backstreet Birmingham boozer, they know how to deal with individuals such as Wood and would be only too pleased to have an intimate conversation…with his kneecaps). But returning to Chris, he crashed the ball a healthy distance with what amounted to less than a half swing, he’d tonk it a country mile if he were to extend his swing arc to John Daly proportions. But if it ain’t broke don’t fix it they say, so I’d therefore advocate a continuation of the short backlift Chris and for that piece of advice there’ll be no charge, however I’d be obliged if you’d, ahem, take another look at the total at the bottom of my scorecard which you were kindly marking, if you catch my drift? ?

At the AGM get yourself on the committee.