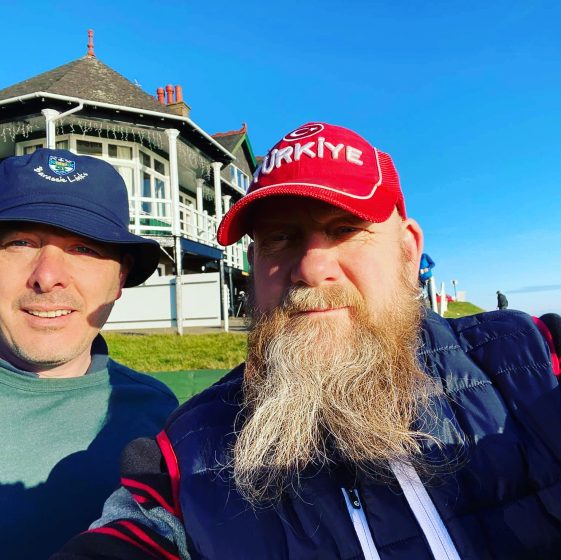 The world of golf was shaken this weekend by news that the Douglas/Russon partnership has pulled out of the Stonehaven Golf Club winter league, a bombshell few could have predicted. After a shaky start to the campaign, results had been improving, yet, in a terse statement from Douglas’s agent, the duo’s seemingly harmonious relationship has been brought to an abrupt end.

“My client, Keith Douglas, would like to announce his withdrawal from this season’s Winter League Doubles event at Stonehaven Golf Club. He’d like to thank the organisers for their efforts, the green keepers for their upkeep of the course and wish all remaining competitors well for the remainder of the season. With regard to Alex Russon however, he wishes nothing but a pox upon his house. Preferably sometime soon”.

The statement went on to describe the reasons for Douglas’s decision but cannot be printed here given its expletive ridden content. We have been able to establish however that the partnership suffered a significant breakdown following their latest competitive outing which found Douglas storming off the course in apoplectic rage. It appears Russon’s performance that day, and subsequent unrepentant attitude, proved the straw that broke the camel’s back after several weeks of unrest between the pair. The two had been firm friends since their schooldays in the eighties, however are now unlikely to cross the road to assist were the other to be on fire.

Seeking a deeper insight into the unsavoury matter, we contacted a recent playing partner of the feuding pair and, while not wanting to be quoted for fear of reprisals, he reluctantly spilled the beans on his experience.

“ They were insufferable. I get why Douglas couldn’t stand another minute with that Russon character, I couldn’t either, but he’s no saint himself. The pair of them bickered the whole way round, dishing out pelters to each other and turning the air blue, it was torture. Douglas in particular had a potty mouth that wouldn’t be acceptable after the watershed, never mind before it. Good riddance to them both I say, and I believe I speak for the entire club”.

Matters are rumoured to have come to a head on the 14th hole during the duo’s recent, and ultimately final, round. It’s reported that Douglas’s shank onto Skatie Shore was met with howls of derision by Russon who then proceeded to nonchalantly flick his own ball to the hole side with a medium iron, an act which merely rubbed salt into Douglas’s wound. During the subsequent walk to the green, Douglas serenaded his partner with foul mouthed abuse rather than congratulation and Russon reacted with his fists. The pair were soon to be found scuffling in a green side bunker (one to which Douglas is well accustomed) and after Douglas had taken his hiding, he spent the remaining holes racing his remote controlled golf caddy at Russon’s person. As a result, it was with a hobble that both of them returned to the locker room, club stewards keeping them apart.

This parting of ways brings to a close a friendship lasting three decades, stretching back to 1986 when Russon won the junior championship (with Douglas languishing dozens of strokes behind in mid table obscurity). The intervening period found Douglas toiling endlessly to equal Russon’s mastery of Stonehaven Golf Club but, with that outcome doomed to eternal failure, he was reduced to an attempted maiming by golf cart instead.

Russon was not available for comment following today’s statement. We contacted his management team who explained that their client was up at the golf club stiffing wedges from a hundred yards and nailing drives straight down the middle.