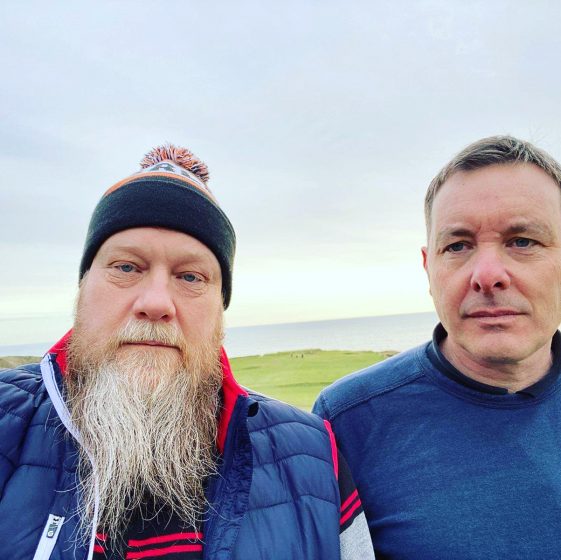 Back in 1991, my football team (Aston Villa) poached the then manager of Sheffield Wednesday, Ron Atkinson. It was just before the start of a new season and to suggest this event caused enmity between the two clubs would be an understatement. A couple of weeks later, when the fixtures came out for the new campaign, you just knew we’d get drawn away at Hillsborough on the first day and sure enough, that’s what happened. I was in the away end that afternoon  when Atkinson emerged from the tunnel to receive fearful pelters from a hostile home support, baying for his blood. As he walked along the touchline they decorated his suit and hair with spittle, and by the time he reached the dugout, his jacket was glistening like a starry nighttime sky.Similarly, when it was announced last week by Keith Douglas that he was withdrawing from our winter league doubles partnership, I had a funny feeling I’d be crossing swords again soon with the gormless goon, and lo and behold, did it not come to pass this very next Sunday. Who should be waiting for me when I pitched up for my allotted start time of 10:20am? Yes you’ve guessed it.

With tee times at a premium these days, given golfers are reduced to playing alone or in two-balls, Douglas had no choice but to place his name next to mine when arranging his weekend knock. Neither of us were over impressed with this turn of events, sizing each other up on the first tee with dismissive disregard. I’m not sure who was the more disgusted, him or me. Last week’s bitter shenanigans, whereby Douglas withdrew from our partnership, had left a bad taste between us, but we reluctantly agreed to deal with it like men, or in his words ‘jist get on wi’ it’.

The conditions were freezing, but not as cold as the sub zero atmosphere as we alighted upon the first hole, (see the photo attached for an indication of the somewhat cool atmos). It had been a mere seven days since he’d pulled out of our winter league participation, yet we now found ourselves gurning across the fairways at each other once again. Without wishing to rake over old coals, he’d withdrawn from the event last week claiming my attitude to be insufferable, pretty rich coming from a duffer who….oh let’s not get into that all over again, it was dealt with last week. Suffice to say we commenced our eighteen holes this week daggers drawn, and ended it likewise. He wasn’t pleased when I told him we’d continue in the league despite his outburst of last week, but I explained I’d be sueing him for libel if he didn’t comply so he reluctantly, and gracelessly, agreed.

Three hours of awkward silences later, we shuffled off the course with a respectable 65 in our back pockets, albeit barely having said two words to one another the whole way round. I’d attempted conversation when we reached the 8th fairway but he’d pretended not to hear, unless he genuinely couldn’t hear since he was concentrating on finding the result of his latest duck hook off the tee. He did manage to volunteer conversation on the 15th green, demanding an explanation for my missed putt, a demand I didn’t demean myself by answering, particularly since he’d just three stabbed his way to yet another bogey. He collects bogeys like some people collect stamps.

It was champagne golf from my good self as I racked up the birdies (12th, 16th, 17th) while narrowly missing countless other attempts. I’m pleased to say I’ve successfully addressed my short game yips, those nervy jabs from just off the green that have your playing partners diving for cover as your rocket speed knifings threaten to fracture ankles. That said, there was a slight altercation with Douglas on the 13th when I elected to putt my ball onto the green from five yards away while he opined that  ‘proper golfers’ would chip it. Imagine my pleasure then when rolling said putt to the hole side for a tap-in while his chip shot, from virtually the same spot, ended several feet from the cup. Talk about letting your golf do the talking. I nonchalantly nudged my par putt into the hole before, wordlessly, vacating the green for him to attempt his. I don’t know whether he holed it or not, I couldn’t care less, our three was in the bag thanks to me and I had no time to hang around for his superfluous contribution.

All in all 65 was a pretty good return, particularly given our days in the competition seemed over just a week ago. To be fair to the bearded wonder, he did negotiate a birdie on the 10th (the shortest par four on the course) although beyond that failing to come to the party with any serious effect, except for an unseemly stagger to a par on the last. Overall it was a paltry contribution from Douglas as he left his partner to pepper the communal scorecard with low numbers.

Reports of our early exit from this year’s winter league doubles competition then are somewhat previous as we have, albeit kicking and screaming, agreed to fulfil our obligations after all. Having entered the league in good faith at the start of the season, we shall complete it and look forward to receiving our appearance money in due course. May it be placed on record, however, that it wasn’t I who flounced off last week to release a statement to the press announcing my withdrawal from the competition, it was Douglas. I’m proud that I had the good grace to continue our partnership, despite his intense provocation, and when we lift the trophy at the end of the season, it’ll be only right that it is I who delivers the winner’s speech. It couldn’t be Douglas anyway, the trophy would simply get lost in that preposterous foliage beneath his chin.