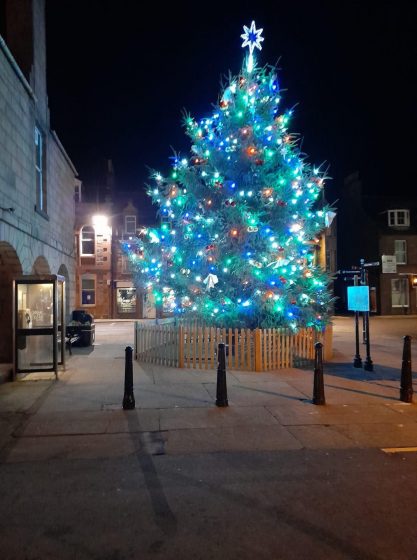 While ambling home at 10pm on Friday evening, after another triumphant shift on Mearns FM radio, (my perspective only), my eyes fell upon the dazzling sight of our town’s famed Christmas tree. The town was empty, I hadn’t a soul for company, even the dog walkers had packed in for the night, but up ahead I found solace. On an otherwise dark, dank winter’s evening, there stood the Stonehaven market square Christmas tree, every colour of the rainbow represented by a myriad of twinkling lights dangling from its branches. And as its peak climbed into the pitch black sky, I reflected on how comforted I was by this happy scene, it brightened an otherwise gloomy night, giving me a warm, fuzzy feeling inside. The market square doesn’t bristle these days, the hustle and bustle has gone thanks to Covid, what was formerly a hive of activity has become a tired location as we await the pandemic’s demise and a return to normality. The sight of this splendid tree was therefore a tonic.

I took a photograph of said tree, being careful to stand at a safe distance given the angle at which it was leaning was somewhat precarious, and I placed the snap on a Facebook page relating to all matters Stonehaven. A discussion ensued, some residents calling for the tree’s removal but the majority supporting its continuance since it represented a beacon of light, literally, during difficult times. All of which got me to thinking, where did I stand on the matter? To tree or not to tree? That was the question.

On one hand, I appreciate it’s a jolly sight for townsfolk and I’m a firm believer in the little pleasures being what truly matter in life. What would be the harm in leaving a brightly lit tree in the square if it was going to give folk pleasure, albeit only for a moment. On the other hand, however, if it stayed up too long the novelty would wear off and what began life as a handsome recognition of the festive season, could become a laughable embarrassment now its raison detre had gone. There’s no doubting that the tree represents Christmas, it is after all a ‘Christmas tree’, so while it gives pleasure beyond the Yuletide season, it’s no longer serving its original purpose. If we want cheering up with bright lights in downtown Stoney, let’s twin with New York’s Times Square and fetch their street planners in for some advice. Or perform a twice weekly strobe lighting set from the benches outside the Market Bar, throwing some shapes while we’re at it.

No, on reflection, I reckon it’s time the old girl came down. We’re approaching February and there are Easter eggs in the shops for goodness sake, carry on much longer and Santa’ll be on our case, sending an attaché of elves to chop the thing up since he’s losing his relevance. There’s a time and a place my mother used to say, particularly when I performed vulgar wind breaking virtuosos before members of her monthly knitting circle, and this isn’t it. We’ve had our fun and now it must end, let’s make way for the next season in our lives and quit harking back to the old.

Besides, and here we come to the elephant in the room, if we leave the decision much longer, it’ll soon be taken out of our hands, regardless. By month end there’ll be no need to chop the tree down whether by elves or tree surgeons, the thing’s seemingly about to go over of its own accord. Give it another week and it’ll be flat on its back, it’s so lopsided that the fact it remains (kinda) vertical is now the eight wonder of the world. I haven’t seen a car parked within forty feet of it since Christmas, no-one wants to come back from fetching their messages to find their motor totalled beneath a tree, even if its branches are flashing pretty colours and your bonnet’s decorated in tinsel.

No, it’s gotta go I’m afraid. It’s been a terrific spectacle and a credit to the town but enough’s enough. Goodbye Christmas tree, we look forward to your return at an appropriate juncture later in the year, meantime we’ll strive to brighten up our town in other ways. I’m thinking a Saturday afternoon parade of leopard skin thonged geriatrics in pink wigs. Do I have a seconder?

Funny and apposite as usual Alex. Yes time it was gone!!