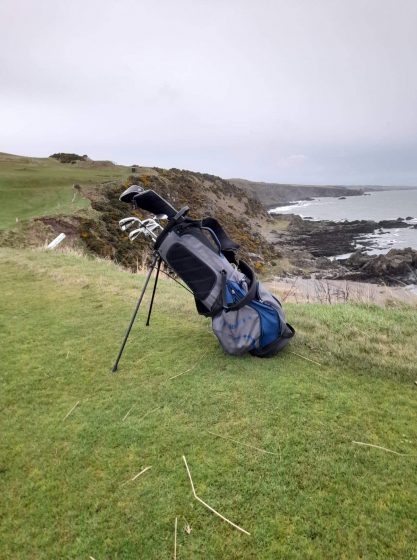 I’m no David Attenborough, or Sean Connery for that matter, but believe me I know what I’m talking about when it comes to attracting members of the opposite sex. You’ve either got it or you haven’t right? Peacocks, for example, will extravagantly fan their feathers to attract hens, and some bird species construct ornate nests with which to tempt females into their company. For my part, with regard to fool safe methods that cause women to go weak at the knees, I find crashing a fairway splitting boomer down the middle of the first hole at Stonehaven Golf Club does the trick. Ladies just love it.

I took the trouble to demonstrate this particular technique when golfing with my winter league partner, Keith Douglas, on Sunday past (not that he’s currently in need of advice on the romantic front, he’s already courting, but I showed him what to do just in case his situation changes). On the first tee, I’d seen a drop dead gorgeous lady due to play in the twoball directly behind us, a beauty and no mistake, so I decided to exhibit the Russon technique of impressing a woman. You might like to take notes gentlemen, you can thank me for it later.

Addressing my ball with a shimmy of the hips, and protruding my bottom just ever so slightly, I pouted, with chin uplifted, and proceeded to crunch a drive of immense proportions straight up the middle, so far up the fairway in fact that my second shot needed to be played backwards. It was a golf shot that purred, my driver literally smoking as I returned it to my bag. I stood nonchalantly next to Douglas and whispered “that’s how you do it mate, a cheeky wiggle, a look of confidence, a flex of the muscles and bang, spank one into the stratosphere. They just love it”.

Douglas arched his eyebrows and suggested I look behind me. This I did, whereupon I found that my intended target had in fact been walking back to her car while I played my shot, she’d forgotten her hat. It turned out the only audience I’d had was Douglas, the bearded wonder, the lady’s playing partner yet to turn up. No adoring ripple of applause then, or request for my phone number. Still, there’ll be other fish in the sea, I just hope they play golf. At Stonehaven. On Sunday mornings. About 10.30am.

Somewhat chastened, my playing partner and I continued on our merry way, notching a creditable 67 in challenging, frosty conditions. Once again Douglas sleepwalked through the opening holes, offering little by way of worthwhile contribution and appearing not to be enjoying himself on any level. “Well this has been a waste of a Sunday” the curmudgeon mumbled while trudging up the 4th fairway, having muffed yet another drive. His mood didn’t improve given it was the 9th hole before our joint scorecard registered an outright entry from him. He had a shocker and no mistake, leaving me to, once again, carry him around the course. I should double as a pit pony.

Keith Douglas is a former club champion and deserves an, albeit grudging, degree of respect for having his name etched onto the clubhouse’s scroll of honour. That said, his attitude towards two juniors traversing the 4th fairway as he stood over his tee shot on the 12th belied this notion. The pair of them had teed off and were absentmindedly ambling into Douglas’s line of sight as they pursued their golf balls, the fairways cross you see. Their innocent actions meant Douglas had to step away from his shot for a moment, allowing them time to clear, but not before he hollered “huv some respect eh?! D’ya nae ken I’m a two time club champion”. No class. I’m not sure the words ‘modesty’ or ‘humility’ feature in Douglas’s vocabulary, ‘big’ and ‘heid’ do though.

I hung around in the car park for a good half hour after our round was completed, on the off chance that the afore mentioned beauty would show up following the completion of her game. This turned out to be a forlorn hope, she had in fact bolted after the 17th hole in case I approached her, my wolf whistles during the round apparently putting her off, and the love letters I left for her to find in each of the holes too.

I’d stripped down to my tee shirt on the 2nd tee, despite sub zero temperatures, hoping my bulging biceps might impress her, they didn’t, and my despair was complete an hour later when paramedics were called to attend to my hyperthermia. Three hours in a tee-shirt on Stonehaven Golf Club in January hadn’t been the most prudent of moves. Hey ho, if don’t buy a ticket, you don’t win the raffle right? If you’re a lady looking for love, feel free to form an orderly queue at the 1st tee this Sunday morning and your dreams just might come true ?.