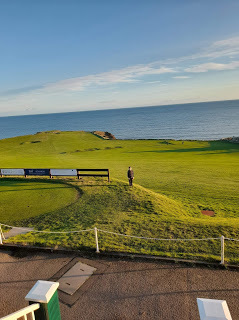 After a weather enforced four week break, the Winter League reconvened this weekend, a procession of golfers delighted to be back out on the course. Saturday was wet, Sunday was windy, Douglas and I playing on the Sunday with his backside competing to be heard above the gusty elements. The elements lost, he has no class that man.

His golf trolley broken, Douglas had to carry his bag around the course and such is his laziness, he brought only a half set of clubs so his load wasn’t too heavy. Diddums. He played well though, to be fair to him, shoring our scorecard up with agreeable golf, low on flair but low on scoring too. It was left to me to provide the fireworks, driving a par four and narrowly missing my eagle attempt, but comfortably negotiating our only birdie of the first nine. If I had my putting boots on our score may have been better than the 69 we carded but I couldn’t sink anything beyond a foot, and even that was a struggle.

Golf in windy weather can be something of a lottery, particularly when it’s a four club wind as it was today. Take the 6th hole, usually a one hundred yard dink with a pitching wedge, but today a full blooded six iron. It does nothing for your ego either when you’re at the top of the 9th fairway and find yourself battering a seven iron only for it to barely reach the green side bunker just eighty yards away. Douglas was merciless in his taunting of my approach shot, he seems to delight in my misfortune, hard to stomach when you consider we’re partners. I’d made a concerted effort this week not to get irritated by him and to be gracious, but he tested my patience. I even managed not to laugh when he attempted some limbering stretches on the 13th tee, taking some minutes to return to his full height, creaking upwards in instalments before almost toppling over. Athletic and lithe he is not.

Credit where it’s due though, he produced a fine shot on the 16th, improvising with a low chasing 3 wood from a hundred and fifty yards against a gale blowing hard in his face, negotiating his ball onto the green. No more praise though, it goes to his head.

Where we stand in the league table with just four rounds to play I don’t know. The winter league rules have it that your best ten rounds qualify towards a final total and the four best scores go through to finals day. I have a sneaking suspicion that we’re toast already but never say never, if Douglas ups his game and I remember how to hole putts again we may squeeze through. Regardless, great to be out there again and Spring is just around the corner ?.