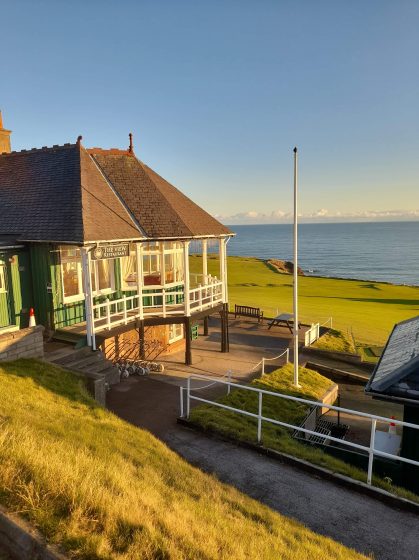 I’m guilty sometimes of truth economy with my write ups on here, exaggerating my contribution to our team score a little. Keith Douglas and I play in Stonehaven Golf Club’s winter league doubles competition, our best individual score on each hole counting towards the team total, and I’ve been known to big myself up on occasion, claiming a larger portion of credit than perhaps I ought.

This week, however, I can confirm in no uncertain terms that I dominated proceedings, leaving Douglas to trail in my wake while I sank putts with gay abandon, he may as well have stayed at home. He chipped in here and there (not literally, his short game was bowf) but mostly it was my score which was scribbled onto the card as we departed the green. I was on fire with putter in hand, the hole the size of a bucket, I couldn’t miss, birdieing holes on the front and back nine while Douglas scratched his backside. No one warms to a big head so I’ll leave it there but believe me, my golf this weekend was SOLID, A1, gold plated quality. I deserve a plaque up there.

Not all of it was edifying though, for example we turned the 3rd and 11th fairways into X-rated zones during our round, both disrobing to reveal blubberous white torsos when the weather became unseasonably hot. The sight of two out of condition, topless middle aged men, albeit momentarily, removing excess undergarments, is not one Stonehaven Golf Club needs to become accustomed to. If anyone had the misfortune to lay eyes on us I do apologise. If it’s any consolation, we didn’t remove our trousers and we bogeyed both holes.

Other incidents of note; Douglas duffing his chip into a green side bunker on the 5th having bragged about out driving me, both of us birdieing the 6th (but me first so his was effectively meaningless), Douglas interrupting our game of golf with business talk when bumping into Neil Cattanach on the 11th (bang out of order, there’s a time and place), me completing the last three holes in one under par while Douglas fluffed his lines with a ball out of bounds (16th), a yanked tee shot virtually onto the 3rd tee (17th) and a hapless bogey (18th).

There are two rounds of the winter league still to play before the top four go through to the final. We lie 7th out of 9 teams, the two teams behind us having pulled out ?. There’s work then to do, but we’re up to the task, I look forward this time next week to describing a barrage of birdies and a sub-60 round.