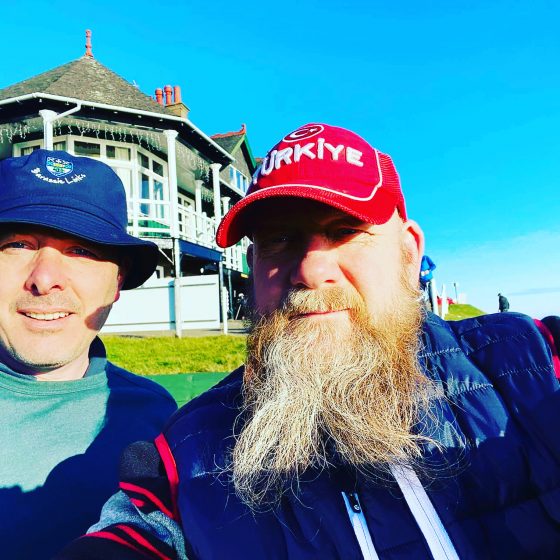 Just two weeks remain of this season’s winter league at Stonehaven Golf Club, the competition boiling down to the penultimate qualifying round this weekend past. The finals are to be held in a fortnight’s time and I now have grave doubts that myself and Douglas will be participating after our latest fiasco, a reprehensible 70 in grade A conditions. The fat lady hasn’t so much cleared her throat as completed her first verse as far as our chances are concerned, in fact she’s probably in her taxi home by now.

There’s no point sugar coating it, we were bowf this weekend, neither of us getting our act together until Douglas fluked a couple of consecutive birdies on the back nine. We started badly and went downhill from there, our mojo deserting us as we slapped, duffed and muffed our way to a four over par total when four under was begging to be carded. The portents weren’t good when Douglas’s electric golf trolley ground to a halt before he’d even left the car park, his overnight charging of the damn thing proving futile as, like a bucking bronco, it refused to comply with his instruction. We therefore had the ludicrous sight of him lugging an enormous pro bag all the way around the course and reaching a state of virtual collapse long before the 18th. By then he’d grumbled and mumbled his way to a collection of bogeys, aided and abetted by my own lame performance as the wheels came off of our winter league wagon.

Not much more to add really, the disappointment of our apparent failure to qualify rendering me speechless. A few years ago, when we last competed in the doubles together, we qualified for the final with plenty to spare, this time however we’ve spent the majority of the winter stinking out Stonehaven Golf Club like a decomposing pilchard on a summer’s day. I’m not prepared to take full responsibility for our demise since my handicap is significantly higher than Douglas’s, the onus was really for him to step up to the plate. While I’ve not played terrifically well myself, he’s underperformed on a scale akin to Liverpool FC this season and needs to have a long hard look at himself before deciding whether his golfing career really ought to continue. Every sportsman has his day in the sun but when that day passes he needs to take stock and consider if it be best to continue or hang up his boots, perhaps the time has come for Douglas. He’s had a good innings but is well past his sell by date, a membership at the bowling club might be a more prudent option, or twice weekly game of cribbage when the pubs open again.

One qualifying round left then and the finals to follow. With us seemingly out of contention, I might wear fancy dress for our last hurrah like away fans do on the last day of the football season. I’ll dig out my Gorilla outfit and Douglas can just turn up looking, and playing, like Mickey Mouse as per.