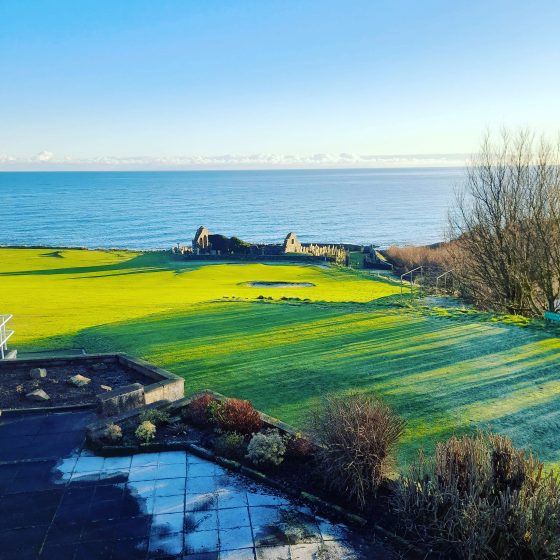 And it came to pass, after several gruelling months playing in the Winter League, that the Douglas & Russon combo failed to reach the final. In this week’s last qualifying round of the campaign, our performance ended up typifying our hapless season as we fluffed our lines yet again to end the competition closer to the bottom of the table than the top. For this I hold Douglas solely accountable, but more of that later.

It was a glorious blue sky Sunday when we alighted upon the first tee, myself in modest, understated navy attire, Douglas looking like a circus clown in bright orange breeks and sporting a naval touching beard. If you’re on your A game, by all means make a spectacle of yourself in garish orange, but if you’ve spent the winter hacking the course to within an inch of its life, it’s best to dress rather more soberly Douglas, you gormless goon. Regardless of his wardrobe malfunction, we crashed our opening tee shots alongside Hitler’s Bunker and set off on our final voyage, Douglas fluking a birdie on the 1st having thinned an approach shot which miraculously grabbed on the heavy turf when it deserved one bounce and oot.

We scored well on several of the early holes, both parring the difficult 2nd before Douglas notched another birdie on the 3rd, his reaction leaving a lot to be desired mind you, cavorting around the green as he did,  like a jack-in-a-box, high fiving imaginary spectators and cupping his ear in my direction. No class some people, but two birdies within the first three holes wasn’t to be scoffed at, I’ll give him that.

But then the pantomime started. Standing on the 5th tee, he discovered he’d left his plastic fairway mat back on the previous one, so started a marathon trudge all the way back to collect it. Ten minutes and eight hundred yards later, he shuffled back without it only to discover he’d left the blessed thing in his golf bag side pocket, the cretin. He’d already had me walking back from the 2nd green to the tee earlier, to retrieve his 3 wood cover, and then as we crossed the gully, to complete the hat trick, he was handed his plastic rake attachment by club captain, Ian Wood, another accessory he’d littered the course with. It was like playing golf with a child unprepared for his first day at school, surely a miracle he’d managed to put his trousers on the right way round.

By now Douglas’s caperings with his golf equipment had muddled his mind and this in turn adversely affected his golf. Having given it the big one on the 6th tee, bragging about his three early birdies, he wasn’t to make another meaningful contribution until deep into the back nine, the 14th to be precise, and even then it was with a lamentable three putted bogey after my tee shot had wound up on the beach. (In my defence, I’d started to struggle under the endless weight of responsibility, finally it told. I’d played the four field holes in one under par while he was stinking them out, and I’d completed the gully in one under too, it was about time he came to the party).

Before we finished, there was still time for another three hundred yard yomp back down the 16th fairway when Douglas lost his wood cover yet again, although he did birdie the hole to be fair to him, but his two,  lame, missed short putts on 17 and 18 had us notch a final total of 64, a long way from earning us a finals day appearance. Still, at least the torture is over for another season, it only remains for us to wish the finalists well while we contemplate our navals in front of the telly.

I’d like to thank Keith for his pleasant companionship this season, but I won’t , because it wasn’t. Instead I wish a pox upon his house and for a career opportunity to present itself in Outer Mongolia, one that I advise him to take advantage of. I’ll be looking for a new partner next year, one who can walk the walk and not just talk the talk, who can play golf under pressure and who performs to a standard at least remotely adjacent to his supposed handicap.

Over and out for another season ?