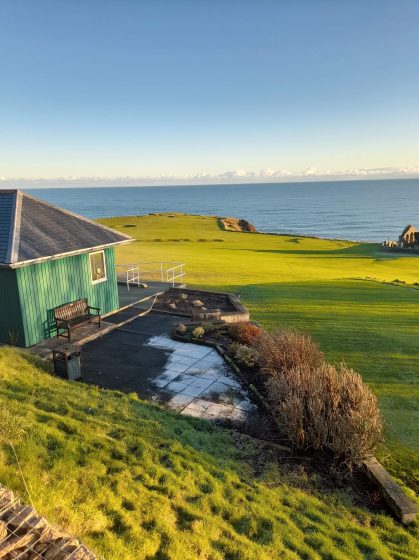 As the new golfing season cranks into gear, we’re introducing a hole by hole guide to Stonehaven Golf Club over forthcoming weeks. The golf club has been a focal point of the town for well over a century, but if you’ve never visited it, perhaps we can give you an idea of what to expect should you pitch yourself up there some day. This week we’re kicking off, rather predictably, with the 1st hole which is named ‘Ruthery’ and sponsored by the good people of The Tolbooth. The club’s main sponsor is Groundwater Trucks and more about them in coming weeks.

The first hole offers a picturesque gateway to a course beloved by its members. It’s a scene of stunning beauty, the fairway stretching 300 yards and culminating in a narrow peninsular, with the North Sea providing a dramatic backdrop. If you’re a competent golfer the hole ought to provide a slam dunk of a par four with which to open your account. If you’re not the most consistent of golfers however, and do something daft off the tee, there’s trouble to be found, but more of that later.

For an adolescent teenager progressing towards manhood, as I was back in the eighties, there were three notable rites of passage along the first fairway, three milestones to be reached from the tee as you progressed through your formative years. It was chastening if your mates reached these yardsticks before you, you’d be busting a gut to beat them to it, the three staging posts in question being 1) the humps, 2) the corner post, and 3) Hitler’s Bunker.

‘The humps’ are familiar to members as three grassy hummocks situated slap bang in the middle of the first fairway, perhaps 150 yards from the tee. To leave your tee shot short of these is an unforgivable offence, even as a teenager, promising the culprit pelters unconfined. The punishment ought to have been the playing of your second shot with your trousers around your ankles but given the first hole lies beneath the clubhouse’s windows, this was perhaps not a sensible move. On the day of the Junior Open, when the place was humming with kids and parents, galleries forming above the first tee to watch the competitors’ opening shots, your sole objective was to clear the humps. If you dumped one down the gully on the back nine later on in your round, or chopped one onto the cliffs on the 7th, that didn’t matter, you’d be out of sight by then with no fear of ridicule, but you prayed you wouldn’t finish shy of the humps on the 1st, the ultimate indignity.

As we grew a little older, able to clear the humps as a matter of course, our next target became the corner post. The first fairway narrows after 180 yards with white out of bounds posts bordering the fairway on the right hand side. These posts cut in diagonally from the right, before taking a severe right hand turn and the first of these white posts to pivot right is known by members as the ‘corner post’. Any tee shot reaching the imaginary dotted line that stretches from the corner post across the first fairway is considered acceptable, any resting place between the humps and the corner post however is merely deserving of a grudging harrumph.

Third, and finally, comes the holy grail of tee shot milestones; Hitler’s Bunker, a crevice on the left hand side of the fairway which needs to be reached or exceeded if you’re going to achieve a hearty ‘good shot’ from your playing partners. Hitler’s lies just 25 yards short of the green and if you reached it as a teenager you really did consider yourself something of a ‘mannie’. Very few of us thwacked our golf ball that far until we started shaving. To crunch a tee shot the distance of Hitler’s, or parallel to it, was to demand the utmost of respect from your peers, indeed even now I roll my shoulders with a sense of pride when I get that far. And I’m fifty one.

I mentioned earlier that despite its apparent simplicity, trouble could be found on the first hole. Such regrettable fates are chiefly located on the right side where it’s curtains if you make a reasonable connection but push or slice the ball. There’s really no future on the right side of the first hole, only the most foolhardy of golfers flirts down that side otherwise your ball’s sailing out of bounds to a watery grave. If you’re not a long hitter, the practice area may come to your rescue off the tee, the ball snarling up in heavy grass before reaching the dreaded white posts. There’s a degree of embarrassment to be endured when playing your second shot from the practice area though, the best advice is to hit it quickly before anyone notices and move on.

The first hole then is not good for slicers or pushers, but if you’re a hooker you’re in luck (so to speak). There’s plenty of space out left given the second fairway resides in that direction, offering an ideal bail out location. You’ll need to have spanked it pretty hard to reach the out of bounds posts on that side of the hole so a shot left is largely safe, the only punishment being the walk of shame to exchange pleasantries with the group ahead, who, unlike you, have every right to occupy that fairway as they advance towards their 2nd green.

The semi rough on both sides of the narrow first fairway is far from punishing so, provided you remain in bounds, the green really ought to be located with your second shot. If you’ve got much more than a pitching wedge in your hand you haven’t struck the finest of tee shots, but beware the cheeky frontage to this green, a steep five foot bank situated between two bunkers. Deliver a lofted pitch that lands upon the downslope and you’ll scuttle through the back, potentially out of bounds. Pull or push your approach shot though and you’ll find sand, care must therefore be taken with your second shot.

There’s a perverse snobbery exhibited by members on the first hole, well amongst my golfing set anyway. The smart play is to hit a low bump and run onto the green for your second shot, particularly on hard ground in the summer, but your prudent approach will merely earn you derision and cat calling. My playing partners demand the parachute style flop shot, the sky high floater that drops like a stone from the clouds onto the putting surface. It’s as if you’ve wimped out if you hit a low one, insufficiently confident in your ability to hurl the ball up into the air for fear of chunking or knifing it. The chip and run is deemed the shot of a coward not a champion these days, a lamentable bail out even if it does trickle closer to the hole than the flamboyant floater. You’ll get the last laugh though if they tug their pitch left, they needn’t miss the green by much to find themselves down the embankment in front of the second tee, and out of bounds.

The first green sits snuggly below the level of the fairway, an amphitheatre of a green with the North Sea offering spectacular surrounds on three sides. The view, from the green, of the coastline to Stonehaven is beautiful and you can also make out Dunnottar Castle’s silhouette as it cuts into the skyline above the cliffs a mile below the town. The green itself is relatively flat, not too devilish, put a good stroke on your ball and you shouldn’t be taking more than two putts.

Finally, beware the first hundred yards of your walk on the first fairway. If you aren’t paying attention you might be in receipt of a golf ball from the eighteenth tee to the left, since the eighteenth fairway bisects the first. In addition, it’s steeper terrain than you might think over the first hundred yards and if you’re not careful you’ll turn your ankle and watch your golf trolley skitter off towards a humiliating crash landing at the humps.

In summary, a generous par four of an opening hole which ought to have you carding something sensible with which to commence your account. Take more than five shots though and you really ought to be taking a long hard look in the mirror and asking whether golf is the sport for you.