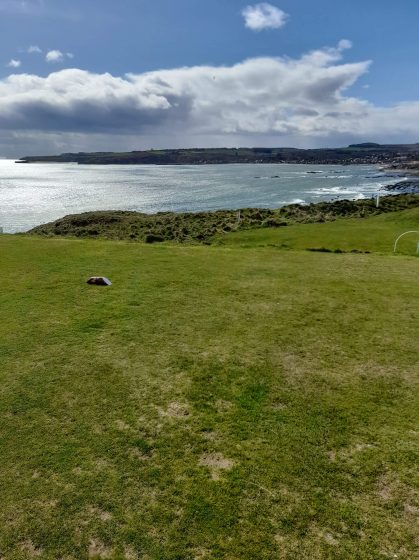 Continuing our tour of Stonehaven Golf Course, we turn to the 2nd hole, not one for the faint hearted. This one is kindly sponsored by GT Joinery (who might be kind enough to build me a gallows if I deliver yet another double bogey there this weekend).

The second hole at Stonehaven Golf Club, while offering terrific views, can be an early scorecard wrecker, particularly if you’re a novice. It’s only a par 3 but don’t let that fool you, it’ll take a proper larrup to reach its plateaued green situated 180 yards from your starting position. And for goodness sake don’t top the ball otherwise the fifty yard ravine that seperates you from the fairway will gobble it up, you need to keep your ball aerial if it’s to come to rest upon terra firma. The trouble doesn’t end there, a ball shoved a little to the right meets a grisly demise upon the severe grassy slopes that gather errant golf balls and deliver them, unceremoniosly, to the beach below. The second hole then is one that demands common sense, ie. just get bat on ball, stay left and don’t try and be cute.

Like many of the vantage points at Stonehaven Golf Club, the second tee offers spectacular views, situated as it is on a small, elevated rectangular peninsular with the vast expanse of the North Sea stretched out behind it. There’s a beautiful view of the coastline when you look south to Stonehaven and on a clear day you’ll find Dunnottar Castle silhouetted above the cliffs a mile or so below the town. In the foreground the crescent shaped bay in front of the promenade welcomes rolling waves into shore and the town’s harbour beckons just a few hundred yards beyond. Nobody likes slow play but it’s a blessing when sluggish golfers hold you up on the second tee, it gives you a chance to truly appreciate the wonder of God’s creation, to enjoy a moment of calm contemplation. Particularly if you’ve just three stabbed the first green.

But presently, our minds must turn to matters in hand, namely getting out of this second hole alive and with scorecard still in tact. The plain fact is that unless you hit a gold plated tee shot, you ain’t gonna be requiring a putter for your next shot, the green being such a shallow target that only the best golfers can find it from 180 yards. I count myself amongst the also rans who hit this green only once in a blue moon, usually with a grubbing thinner, so I’m well versed in the prospect of an awkward chip onto the elevated green for my second shot. It’s preferable to be short of the green rather than long (if you aren’t capable of hitting it), since the putting surface slopes wickedly back towards whence you came, you don’t want to be chipping onto it from the downslope behind. Equally however, if you’ve a dose of the chunks when finding yourself with pitching wedge in hand, the chip shot from below the green presents its own problems since any duffed connection will find the ball dribbling back to your feet and leaving you looking like a piece of cheese. My preference then is an unseemly skulling of the golf ball which, while skittering in ugly fashion to the back of the green, at least finds it resting on the right level for a subsequent putt.

Two bunkers flank the green, like a pair of ears situated either side of a person with a wide face, if that’s not too surreal an image, with two further bunkers lying ten yards short, positioned centrally to collect shots falling shy of the target. It’s one of those holes which can find you selecting any of half a dozen clubs off the tee, on a balmy summer’s day you might reach the green with a mid iron, but in the thick of a windy winter’s morning you could obliterate a driver and still not reach the dancefloor.

The green itself is rapid, particularly in the summer months. If you’re putting from above the hole and apply a little too much pace you can quite easily find yourself disappearing off the front edge, slaloming like a downhill skier towards the bunkers that protect the green. Golf has a habit of humiliating you in front of your friends and the second green is a prime location for such a humbling, an over aggressive putt leaving you to reach for your pitching wedge and stomp off down the slope while your friends exchange knowing grins and chortles. It has been known for players to duff their subsequent pitch back up the hill only to find their ball running past and behind them as it bobbles back downhill before, finally, coming to rest. At this juncture the victim usually swats his ball over the cliff edge, sticks two fingers up to his playing partners and marches off in search of the 19th hole. As I say, the second hole can be a card wrecker and no mistake.

In summary then, unless you’re a good golfer, take your bogey four on the second, accept your hiding, and get off quick before it changes its mind. If you fluke a par consider it a veritable birdie and if you manage a two you really ought to be applying for the Tartan Tour. A tough hole and one best situated behind and not in front of you.