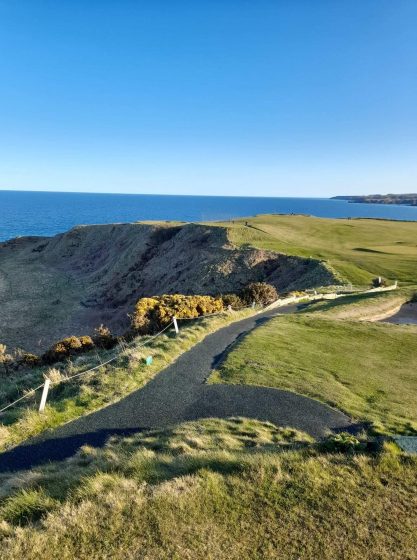 Marvellous sunny weather accompanied this week’s Wednesday competitions at Stonehaven Golf Club, it’s a blessing to play golf under blue skies with the sun beating down. An extra ten degrees on the temperature might have been nice but you can’t have everything.

The winners are detailed below. For my part I managed a net 65 which promised so much more until I blew up going into the field, limping home like a wounded soldier despite the course record being under threat following an early birdie barrage (not my words but playing partner Barry McGillivray, more on that herbert at the bottom of this article*).

But enough waffle, onto the results….

This weekend we have the Cowie Cup 1st Round and Willie Watt Qualifier, 18 holes of strokeplay and no hiding place for those of us preferring the comfort of Stableford competition. I like Stableford, you can have a nightmare of a hole without risking the utter devastation of your scorecard. With strokeplay though there’s no escape from perpetual pressure, one or two inadvertent slip ups and it’s curtains.

Enjoy your game this weekend everybody, weather is set fair(ish).

(*My crisply struck pitch to the 9th green tumbled agonisingly over the back before coming to rest against a fence. I duly moved it to the drop zone before floating a splendid chip onto the dancefloor only to be informed by McGillivray that this drop zone manoeuvre would cost me a penalty shot. Despite my undoubted confidence in a local rule regarding this fence, my protests were met with disdain by McGillivray and worse was to come when our other playing partner, Keith Douglas, backed up his claim that I should be penalised (but you’d expect nothing else from this poisonous individual, he’s never forgiven me for beating him to the first of the club’s majors back in 86).

I gallantly accepted their judgement but reeling somewhat from the injustice and the glee my partners were taking in my misfortune, I went on to make a horlicks of the remaining 9 holes. But get this, I discovered later that evening that these dullards had been very much mistaken, I had in fact been 100% correct when asserting that I should suffer no penalty whatsoever. But it was too late, my score already submitted. All I can say is that it comes to a pretty pass when your first competition of the year is sabotaged by people you’d formerly considered friends, one a former committee member and the other a two time club champion, which he never misses an opportunity to remind me. Well, no more Mr Nice Guy, I’ll wipe the floor with them next Wednesday and no mistake).