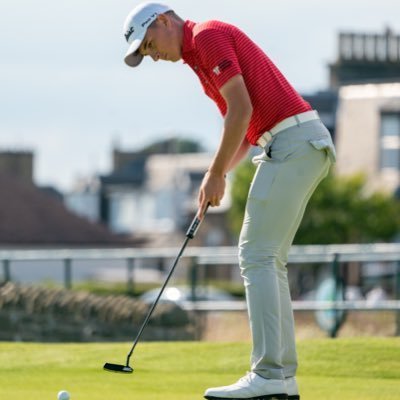 Stonehaven has boasted some terrific golfers over the years and none more impressive than Sam Locke who this week won the Barassie Links Classic in Ayrshire. Five birdies in the last six holes secured his victory as he carded two consecutive rounds of 65, spectacular golf.

The field of seventy four players also included James Arandia, another top Stonehaven based golfer who’s beginning a professional career in the sport, and both will be taking part in next week’s Royal Dornoch Masters too. I played Royal Dornoch once, reputed to be Tom Watson’s favourite golf course, I have a hunch though that they’ll improve on the 97 I returned that day (it was windy mind).

Sam Locke turned professional in 2018 after an incredible performance at the Open Championship in Carnoustie where he finished as leading amateur, an accolade achieved at just 19 years of age. He’s a huge inspiration to many young golfers, old ones too for that matter, dedicating himself to the development of a talent which will find him building on the glories achieved in recent years. And that’s what’s so inspiring, many of us would dine out for the rest of our lives on the Carnoustie achievement, but Sam views it as a catalyst not a culmination.

The Locke family goes back generations in terms of its links with Stonehaven Golf Club. Sam’s father, Andy, learned his golf at Stonehaven and remains a member there alongside his three sons. Andy is a golfing coach of significant renown, based out of the Paul Lawrie Golf Centre in Aberdeen. His father, Gordon, was also a long time member of Stonehaven Golf Club and fondly remembered by many for his contribution when heading up the Junior Section in the eighties. Junior members really mattered to Gordon, he had a passion for encouraging young golfers, something I remember well since I was one of them. Out of that era came juniors who went on to great things in golf; Bryan Innes, David Ross, Andy Locke and a clutch of subsequent Stonehaven Golf Club champions emerged from that generation too.

Sam comes from good golfing stock and his young brothers aren’t too shabby either which suggests the blueprint shows no sign of fading. It’s a blessing to have the Locke family in our town and if Sam can be the inspiration to youngsters that his father and father’s father were, the future’s bright for golf in Stoney.

(As an aside, my Dad’s a long term member at the club where Sam claimed the Barassie Links Classic title this week. He called me up after the event to announce his latest claim to fame, informing me that he too proudly took part in this week’s tournament. I questioned the validity of his claim but apparently one of his errant slices from the adjoining 9 hole course landed on the course while Sam was competing on it. This he suggested should qualify him as a competitor and he looked forward to a cut from the prize money purse. It’s a questionable claim but given he’s 73, this might represent one of his last chances for 15 minutes of fame so I’ll let it slide).