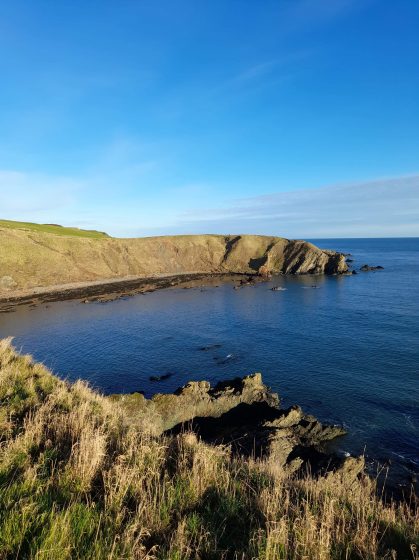 Us golfers are hardy souls, devoting ourselves to a sport that brings all weathers here on the north eastern coast of Scotland. We exited the winter season then with a sigh of relief given the Baltic conditions we’d faced and looked forward with relish to the season proper in a better climate. However, Saturday’s competition was played out in such brutal conditions it felt like the winter league had been revisited. Absolutely dreadful weather it was.

Results understandably suffered with competitors toiling in gusting winds, heavy showers and bone chilling temperatures. It was the kind of day that had you standing on the exposed 14th tee wondering what on earth you were doing on the golf course, the teeth of a freezing gale cutting you in half and heavy globules of precipitation soaking you into the bargain. Hats off then to those who broke par (only 16 of the 121 protagonists) and commiserations to those whose scorecards resembled a bomb site.

(*One can only assume that John was fortunate enough to find a pocket of time on Saturday when the weather relented somewhat. To notch a 9 under par suggests the Tartan Tour beckons and no mistake. A nett 57 is an excellent score on a dry Summer’s day without a breath of wind, it’s a minor miracle though when sleet’s slanting in at you sideways and you’re playing golf dressed like an Eskimo. Well done John 👍.)

This was played in slightly more benign conditions but was still very tough going, cold and blustery but with fewer showers. Scoring was difficult, evidenced by the fact that only 5 of 86 competitors managed to break par.

Neil Cattanach’s nett 60 will have the handicap secretary’s due attention, a slashing is on the cards when you go six under par off a relatively low handicap. That said, the newly introduced world handicapping system has most of us scratching our heads, we’re left bewildered by the analytics used to spew out our handicaps so there’s every chance he’ll get put up to 24.

There were 28 competitors with only one no-return registered, pretty resolute stuff from Stonehaven’s lady members. On the very same day 27 of the 86 male players handed in the dreaded NR, myself included. There’s a thesis in there about the comparative levels of tenacity and attitude between the sexes… but perhaps I’ll leave it at that 🙂.

1st. Josh Killoh 16 points (which in those conditions is sensational and well done too to Molly Skidmore and Matthew Moir for even getting round, it was brutal out there!)