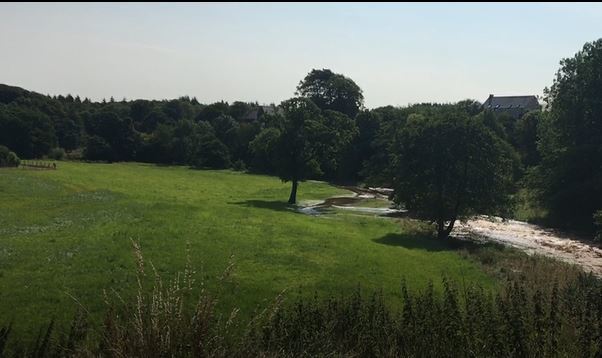 STONEHAVEN groups that may benefit from a proposed development on the banks of the River Carron will be asked to let our Community Council hear their views on the project – after a succession of neighbouring residents highlighted their objections to the proposals.

David Morrison is looking for planning approval in principle for a new home adjacent to his current property at Riverside Drive – and as part of his application is offering local groups areas of the surrounding land he owns.

One area is earmarked for either allotments or to be a base for the Horizon Group; another to provide a bike park for Grampian Tigers, who introduce youngsters to a range of cycling disciplines; and a further area is for the use of our local scouts.

There were almost 40 participants at the meeting where Mr Morrison, who is a keen cyclist, made a presentation in the hope of finding backing from the community council. He said access to the land would not be compromised and the Tigers’ cycle track would also be available for public use.

”I was looking at the provision of something else for the youth of Stonehaven that they can enjoy and don’t have to pay for.”

Residents not happy at loss of countryside

The application elicited a large response with 136 public comments submitted- 61 objections and 72 in support.

At last night’s meeting, member Paddy Coffield summarised the concerns of those objecting, before chairman Bill Watson introduced a series of residents opposing the plans.

Gillian Wishart said there was currently widescale access to Mr Morrison’s land which was used by a wide range of people. She said proposals would change countryside into residential land.

”If the community is willing to exchange countryside for housing then it has to be what the community wants – not what an individual wants,” she said.

”What is needed is small-scale housing, not a gas-guzzling house.”

Katie Banister said the focus should be on the ruining and removal of four acres of land from free access. Colin Dick said the proposals would generate facilities for the future – but would mean looking at a house. He added they should protect the countryside. Mike Ogden said he walked his dog on Mr Morrison’s land and the plans would reduce the area available – a concern echoed by Michele Pittendreigh who said the proposals would take up 24% of the area.

One resident, Robert McCarron, said he was involved with the scouts, who were ‘non-commital’ about the project.

Other voices to be heard

John Cruickshank, Horizon Group convenor, said the volunteers had been looking for an area of land on which to make a base camp – and informal discussions had been had with Mr Morrison. Mr Cruickshank said a polytunnel would enable Horizon to grow their own plants.

Jim Stephen said: ”It would be good to get the feedback from the Tigers and the Allotments Association. Obviously everybody here, the local residents, have put their good points. I would be nice to hear from everyone.”

And while Paddy Coffield proposed lodging an objection to Mr Morrison’s proposals and found support from some of his colleagues, the majority of our community councillors backed Mr Stephen’s call for further consultation.

Previously in The Bellman-

I agree, it’s his land and he’s offering a lot to the community at large in return for building a house for himself. He’s willing to spend a lot of money improving paths as well as the allotments and it would be a real shame if this is voted down

Just think it’s a bit of a cheek to object, just because it would stop someone walking their dog on land owned by another person!

This is a great place for children to sledge, play and explore and has been since these houses were built in about 1982.. I am in favour of the community projects but a large house on this site is of value to only one person and so many would lose out.