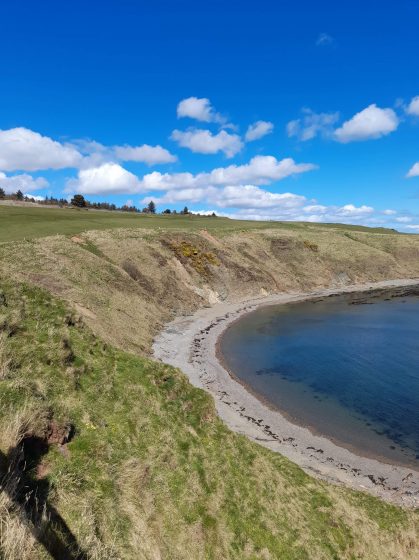 One of the delights of playing golf at Stonehaven GC is the variety of conditions you can be faced with in the matter of a few short days. Last weekend we were basking in sunshine, not a breath of wind to trouble us, yet this weekend we found ourselves wearing four layers of clothing to negotiate four club winds. Understandably the scoring suffered as the elements took hold, the wheels coming off of many a round, the railway line piling high with golf balls, gorse bushes too. Several of our hardier players managed to pull on their big boy pants however to return impressive scores in their quest for the handicap trophy. Two rounds of this tournament have now been played and the final two rounds will be contested on Wed 26th  and Fri 28th May, twenty four players having survived the halfway cut.

This competition is usually an opportunity for the higher handicappers to make hay but this season a low handicapper has come to the fore. Neil Irvine (4) controlled his golf ball rather more effectively than the rest of the field and leads by two strokes, his halfway total of 128 earning him a two shot advantage over Callum Steel (10) with Ramsay Bell (22) a stroke further back alongside Raymond Shearer (15). Twelve shots separate the field going into round three, a field which includes Harry Roulston who, in the midweek Senior Medal, carded an eighteen hole total amounting to a figure lower than his age, a fine feat matched on the same day by Bob Leggate and Neil Robertson. Phil Mickelson surely took his cue from these gentleman when seeking inspiration to become the oldest winner of a major tournament late on Sunday night.

This Saturday sees the annual Texas Scramble, one of the most pleasurable formats in golf. Teams of four tee off on every hole and select the best position of the four drives from which to play their subsequent shots, this procedure continuing until the hole is finished. It’s great fun and the camaraderie can build pleasingly….unless one of your number is struggling to hit a cow’s rear with a banjo. If you’re the one having a shocker you can find yourself walking the final fairways in splendid isolation while your teammates share unflattering words about you up ahead. Conversation amongst them will likely be based on which hole to sacrifice one of your hapless drives to, since each player is required to contribute at least three tee shots. The golden rule, if you’re having a nightmare of a game, is at a minimum to plonk your three contributory drives somewhere sensible, that way you don’t have to sit at a separate table when you get back to the clubhouse.

The Ladies section have a Texas Scramble too this week, plus a nine hole Stableford before their weekly Medal, an event which last week attracted 22 competitors. The calendar is full of fixtures for Ladies, Men and Juniors alike, SGC promises to be a hive of activity then in coming months. Do remember the club’s facilities are now open with members and non-members equally welcome for a relaxing drink or bite to eat.