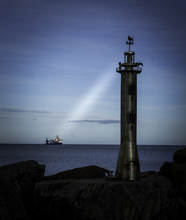 Inspiring Aberdeenshire is one of the council’s biggest annual events. The awards celebrate the achievements and successes of our people across Aberdeenshire who go the extra mile for their communities, often with little or no other official recognition.

And when the awards are made on August 26, in a virtual ceremony, there will be a few folks in Stonehaven holding their breath.

Blythe has been the volunteer Youth Board Representative for The Haven, in Stonehaven, since 2018. Her role is to be the “eyes, ears and voice” for the youth in the community. During the pandemic, Blythe went above and beyond the call of duty volunteering. The Haven transformed their yoga studio into a community food larder and Blythe was the first in donating and helping young people access what they needed. She organised a Scare Hunger food drive with Mackie Academy late last year and was instrumental in The Haven’s crowd-funding success, raising more than £31,000 pounds. She is known for her quietly confident leadership. Blythe really is an incredible role model.

The Horizon Group nominated for the Beautiful Aberdeenshire Environmental award:

The Stonehaven Horizon Group was established in 2005. During those 15 years they have made an enormous contribution to Stonehaven, working to “foster civic pride in the town and make Stonehaven a better place to live and work in”. Their role has included maintaining the many floral displays around the town, working with the eco-school projects, organising regular community litter picks, planting a community orchard, undertaking a “War on Weeds” campaign and looking after a wildflower garden in the harbour area known as Pat’s Patch. They were also instrumental in the Lockdown Painted Pebble project. These are just some examples of what this proactive and dedicated group does to ensure Stonehaven remains a green, colourful and pleasant place to live, work and visit.

The way Raj and his family responded to the Covid pandemic has been exceptional and caring. He is the head chef at the Carron to Mumbai in Stonehaven, and he took his talents and his community spirit out to those in need in the pandemic. He and his five daughters have spent countless hours of their time and skill making meals for the community. They have donated food to those who need it – to NHS staff, to the vulnerable and to young people in the community. He has rallied the people of Stonehaven who donated to help support his ongoing efforts to feed people when they need it most. His daughters even delivered food at Christmas to people who may have little else. Raj and his family are excellent role models and providers of the very best sort of community spirit.

Until recently, Jim worked under the radar, and during the process started to put Stonehaven on the map. Little was known about him, other than him being described as the ‘Stonehaven Banksy’.
Jim is a metal artist who has created several sculptures which have pride of place on the seafront, with a nautical theme of fishing boats, a Viking boat and a lighthouse. From humble beginnings, his art is taking on international acclaim and the sculptures are now well known far and wide.
At the start, only those close to him knew he was the creator of the artworks which appeared over a number of years. Some would even leave scrap metal on his doorstep. In what he called his first and last interview after his identity was revealed he said “I’m nae an artist, I am just a guy that sticks metal together”. But I think we can all agree his artistic talent is bringing attention to his community and will be a real catalyst for tourism in the town. It seems Jim is doing more for this community than he even realises.