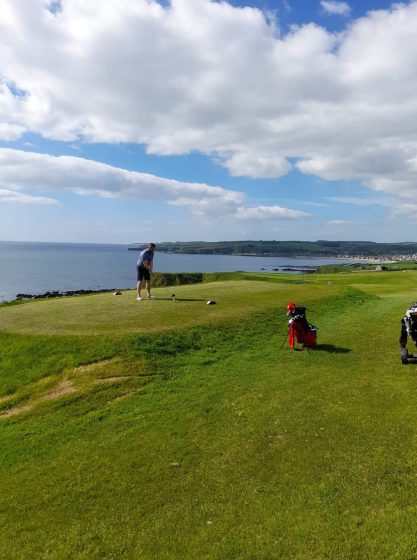 Once again the Cost Del Cowie offered golfers scorching temperatures in which to compete this weekend. 138 players dabbed on the sun cream and loaded up on liquids ahead of three hours pleasurable golf. Recent conditions have seen a proliferation of players wearing shorts, it’s been akin to a milk bottle factory shop floor up there, but we’re not complaining, it’s only five minutes since we were playing in four layers and tammies.

The scoring was excellent once again this week, both of the winners of the men’s section breaking 60 in their respective competitions. The Centenary Trophy was won by Calum Delaney after a superb nett 57 with Ian Carnie finishing a single shot further back. In third place was Neil Irvine, surely wondering where the justice is in golf given his gross score of three under par proved insufficient to secure victory. Playing with such a low handicap must be like running a hundred yard dash in wellington boots while your competitors wear trainers. Still, the portents look good for the former club champion as he limbers up for the annual championship commencing next weekend.

The Ladies’ championship also kicks off this week, three rounds to be played over the course of a few days. The champion’s identity will be unveiled during the inaugural Stonehaven Golf Club radio show on Mearns FM, Monday 8-9pm, Captain Ian Wood the special guest. The men’s championship will have reached the halfway mark by then too so there’ll be lots to discuss, members and non are encouraged to listen in.

Male and female members combined to compete for the Ruby Stevens Trophy this weekend also with a dead heat demanding a playoff on a date to be decided. Congratulations to Catherine Duncan & Callum Mitchell who’ll contest the playoff with Fiona & Bob Armstrong. It was an excellent event with competitors enjoying one another’s company over the course of eighteen holes in perfect sunshine. Stonehaven is a welcoming, inclusive golf club and if you’d like to be a part of it you’d be received with open arms.