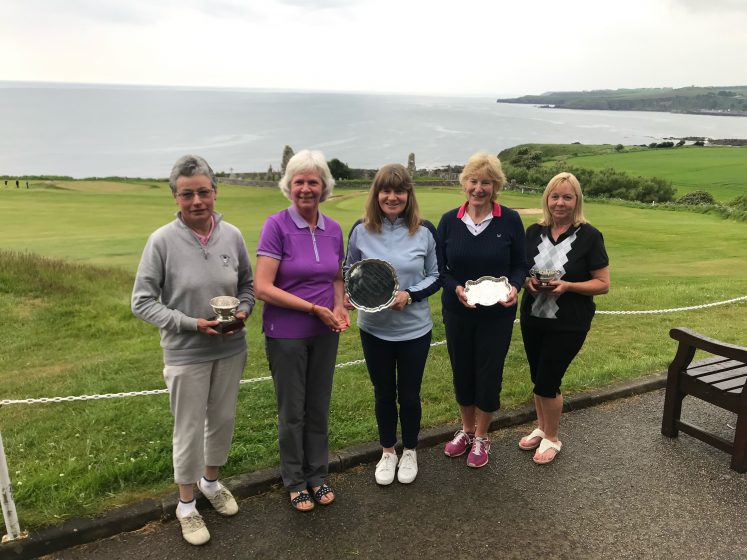 It’s been another tumultuous week at Stonehaven Golf Club, the men’s and ladies championships taking centre stage in a climate better suited to the Caribbean. We’ve had some terrific weather of late and there’s no better sight than the coastline view from the 14th tee on a sunny day, even if you have ripped your scorecard up nine holes prior. We are blessed to be members of this club, you could be too if you’re into golf and looking for a place to call home.

The ladies championship was won this year by Fiona Lamont, her twelfth title no less. Something tells me she knows her way around this manor. Fiona’s three round score of 229 gave her fourteen shots to play with over runner up Wilma Lawrence who headed a chasing pack of twenty for the scratch trophy. Terri McKenzie won the Handicap championship with a total of 192, our congratulations go to her and all participants. Photographed are the aforementioned plus ladies captain Pam Droy and Jackie Hunt.

In the men’s championship, another multi-time former champion leads at the halfway stage. Neil Irvine is one stroke ahead of two players, his son Craig and Kevin Riddell (see below), both former champions too, Craig many times over. Sunday’s family roast in the Irvine household must have been a tense affair, father and son gurning at each other through narrowed eyes over meat and two veg, psyching each other out in advance of the final two rounds. They’ll reconvene on Wednesday and Friday along with the rest of the twenty four strong field, eight of whom lie within ten shots of the lead. It’ll take something spectacular to deny one of the three front runners victory but you never know. If you’ll pardon the indulgence, I myself shouldn’t be overlooked, handily placed a mere twenty shots back and ready to pounce. One must never underestimate the underdog, even if he has fleas.

The final round is on Friday evening. Find out who won by tuning in to the club’s weekly radio show on Mearns FM, Mondays 8-9pm.