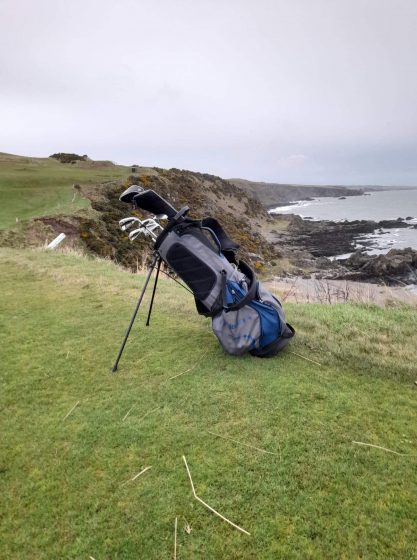 The Senior Club Championship was completed this week with Graeme Adamson securing victory in a very closely run race, his three round total of 214 separating him from Neil Irvine by just a single shot, Stuart Wright finishing only a stroke further back.

The handicap trophy was won by Kenneth Howie, triumphing over the field by a more comfortable seven stroke margin, Peter Beatt ending runner-up and Ron Gilmour in third place. It’s been a terrific event this year with sixty entrants across the two divisions basking in fine weather and enjoying the camaraderie that only golf can bring.

The Saturday Medal was contested in sweltering conditions, hats off to all who managed to complete their round without call for a defibrillator. It was exhausting. Steve Birss won this one with a superb nett 57 and over £200 was raised by the event for the Young Lives vs Cancer charity. Several fundraisers take place during a Stonehaven Golf Club season, benefiting many causes. It’s very much a club with a heart for the local community.

The Ladies section’s weekly medal was won by Fiona Currie (Div 1) and Jayne Thurlow (Div 2). Jayne may demand her own plaque at SGC following her exploits this week, she also won the Ladies Greensomes alongside Evelyn Gilmour.

For the uninitiated, a greensomes event sees partners playing alternate shots and, whilst great fun, it can test the firmest of friendships if one player is playing like Tiger Woods and the other like a bear in the woods. There’s something somewhat chastening about missing a two footer after your partner’s just (supposedly) stiffed it from two hundred yards. Neil MacArthur and Mike Griffin’s friendship appears in no danger though given they won this year’s competition with a nett 57. No furtive glances or awkward silences for them, just fist bumps and pixie dances as they vacated the 18th green.

There are no junior competitions to report on this week, the youngsters are enjoying a well earned break having completed four weeks of wall to wall golf while being off school. If SGC had a pay when play policy their pocket money would surely have ran out by now.