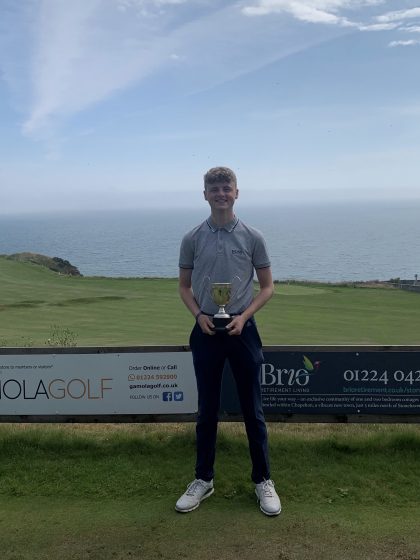 Lots of competitions to report on this week, healthy scoring a consistent feature throughout. We’ve got some fine golfers at Stonehaven Golf Club and no mistake.

The Innes Medal was split into three handicap divisions, each of which won by a sub 60 round, indeed none of the top three players in each section scored more than 62. Alan Officer won his divison with a superb 58, Jack McGillivray (59) and Gregor Knowles (58) triumphing splendidly in theirs. Each can expect a significant handicap laceration after their incredible performances. This event represented the final qualifying round for the DF Leslie, a competition which now reverts to match play format for the sixteen remaining competitors. Ross McAllan carries forth the honour of best gross tally into the knockout stages (131), again excellent shooting.

The Junior Championships are over for another year and it’s no surprise to see the Locke family dominating. Stonehaven is blessed with a fine golfing family in the Lockes; Sam turning professional after a sensational showing in the Open Championship 2018 and his father Andy a revered golf coach based out of the Paul Lawrie Golf Centre. Well now it’s Joe and Charlie’s turn in the limelight, both winning their respective championship categories. Much more of this and the clubhouse will need to be renamed The Locke Lounge with a family statue erected in the car park.

The Junior section continues to thrive in a wider sense with several youngsters showing great promise alongside the Locke brothers. Congratulations go to the brothers Moir (Lewis and Matthew) for occupying the top two slots in the nett championship and an excellent two round total by Alana Henderson won her Division 2 of the 9 Hole Championship. The club’s future is in good hands.

Jan Bradford and Margaret Campbell carried off the spoils in the Ladies Medal this week, both returning sub-par rounds, and the 2ball Texas Scramble was won handsomely by Jacqui Blackburn and Fiona Lamont’s 58. A new putting technique adopted by the former was rumoured to have contributed heavily to this success, the rest of the club’s membership await with baited breath as to the details of this newly discovered trade secret.

In other news, the Russon/Robertson departed the RBS competition with a lamentable defeat to Shine/Mechie. In a performance as grotesque as it was inept, the hapless duo narrowly avoided adding a second dog licence (7&6) of the season. If the partnership were an animal legally required to be licensed, it would now look forward instead to a euthanised easing into pet cemetery by a veterinary surgeon. It’d be the kindest thing to do. Further details of this tawdry episode can be heard on the weekly SGC radio show, Mearns FM 8-9pm.