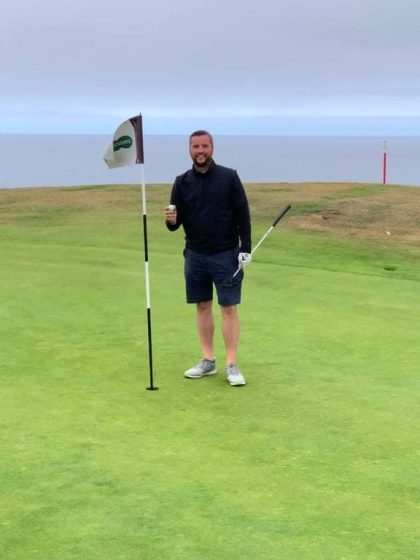 Simon Mitchell celebrates his hole-in-one with the obligatory ‘man holding golf ball while standing alongside a flag’ photograph.

Our pleasingly balmy summer continues apace, stretching into September and allowing Stonehaven Golf Club’s members the pleasure of benign conditions in which to enjoy their golf. Knockout tournaments are nearing their culmination with grand finals day beckoning and weekly stroke play events remain ongoing, there’s plenty then still to play for.

This month’s Innes Medal was again played in blazing sunshine and won, aptly, by David Summers who nudged out Sam Geddes with a better back nine after they both carded nett 61’s. Division 3 found John Findlay top of the pile with an excellent 59 but all eyes were on Division 2’s winner Simon Mitchell who accomplished a fine treble. First, his net 60 won him the competition, second he muscled a down wind 3wood into the cup from 160 yards on the 7th for a hole-in-one, and third, he trousered £138 in prize money for his aforementioned feat. Clubhouse gossip suggests Mitchell will be using his windfall to purchase a set of dumbbells with which to train daily, perhaps then he might start reaching the first green in two.

The midweek Stableford was won by Sam Geddes, Saturday’s Innes Medal runner-up, a splendid week’s golf from Sam to keep the club’s Handicap Secretary busy. The Senior Medal found Steven McGhie atop the first division with John McMenemy decimating the field in Division 2, Gary Robertson the comfortable victor in Division 3.

The Ladies Medal Final was held on Sunday, again in splendid sunshine although breezy conditions made good scoring tricky. Congratulations to Jane Kennedy for winning the first division by two shots and to Janet Owen for winning the second with a convincing five stroke margin. The Ladies’ summer season reaches its climax at the end of September but not before a further half dozen or so competitions are contested ahead of the winter season’s commencement in October.