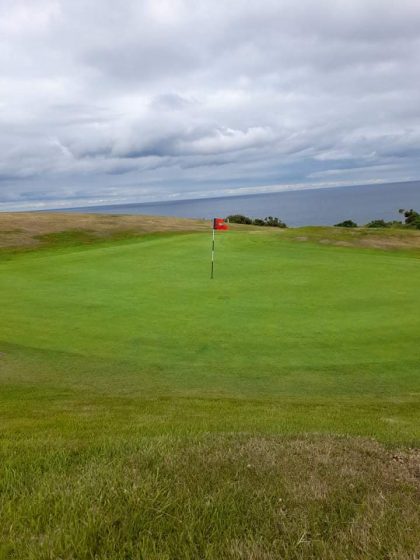 Stonehaven Golf Club finds itself with an ‘after the Lord Mayor’s Show’ vibe right now; the Summer season formally over while the Winter season is yet to begin. Whilst the debris is swept away by the caretaker, the bunting hanging apologetically from the ceiling, we’re forced to wait a little longer for the Winter League to commence. No matter, a couple of Stableford comps are sustaining interest while we tread water and dry clean our long johns in anticipation.

Mike Griffin and Gary Robertson found themselves in high handicap heaven during this week’s respective Stableford competitions. Exactly one hundred competitors took part in Saturday’s event, Mike triumphing by a solitary point over Jacek Nowak and Duncan McRae. And on Wednesday, Gary Robertson belied his 25 handicap by birdieing the first hole and eagling the fourth on his way to a 43 point tally which overhauled the field of 76 competitors. Runner up was Jason Barbour who discovered a gross score of two under par simply wasn’t good enough. Golf’s a harsh gig sometimes.

Before revealing the Ladies 12 hole Stableford results, it’s my solemn duty to bring into question the merits of two very recent major winners; Stuart Dempster and Harry Roulston. The former besmirched his hard earned DF Leslie title by failing to reach the humps off the first tee last week, in full view of the clubhouse, and the latter followed his JM Low triumph with a  lowly 92nd place in the weekend Stableford. The mantle of SGC major winner brings with it significant weight, it would appear these two have dropped said mantle upon their toes.

Mantle carrying isn’t something that Fiona Lamont labours under, she’s won the Ladies Championship multiple times and continues to lead the pack. This week she secured the 12 hole Stableford on countback (over Lynne Carnie), again proving herself to be the most consistent and reliable of performers.