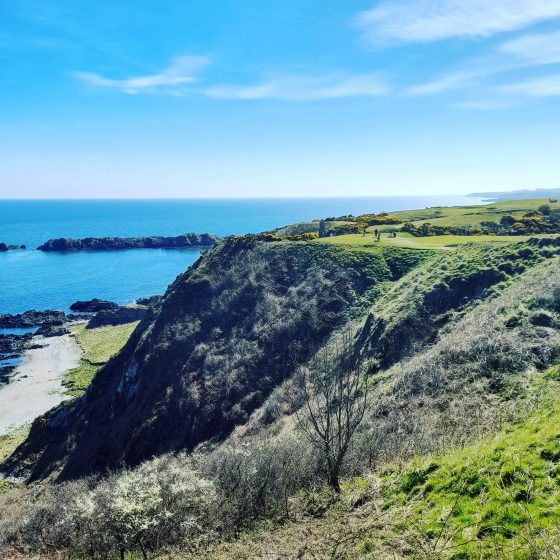 Stonehaven Golf Club’s winter league is up and running, a hundred or so competitors booked in for the long season sprawled out ahead of them. There are three men’s competitions; a scratch doubles, a nett doubles and a Stableford singles. Players post their scores every weekend, their best ten contributions by season’s end going forward to decide whether they’ve made the cut for finals day. I think I’ve got that right, for corroboration seek the Competition Secretary or, do as I do and crack on until March then take what you get.

The weather last weekend was mercifully dry and scoring impressive as a result. Steve Crawford won the Stableford, diligently recovering his composure after a nosebleed sustained on the back nine while birdieing two out of three holes. He went on to amass a whopping 42 points to nudge Ian Shearer into second place, Ian magnificently eagling the 16th on his way in and perhaps releasing a touch of beak scarlet himself.

Sixty one players took part in the Stableford event, with varying degrees of success. We’re not here to embarrass those at the wrong end of the leaderboard, they can lick their wounds without need of our intrusion, but a word for a couple of players finishing in the top ten. The scorecard never lies, neither does it paint pretty pictures. One player’s 38 point total can be achieved in flamboyant style while another matches that tally despite bumbling along without fanfare. In this regard, Jason Barbour’s 38 points sparkled with no less than six birdies, while Brian Hardstaff huffed and puffed his way to the same total in a featureless, birdie free round of humdrum pars and bogeys. That’s golf I suppose, some play with gay abandon, others with a mindset of joyless attrition. It takes all sorts.

The nett Doubles event saw a preposterous winning score of twelve under par. Granted, the winter course is foreshortened and the conditions last week were benign, but nevertheless, it’s downright rude to humble the old girl with a 54. Congratulations however go to culprits McFarlane and MacArthur, still in recovery mode themselves after a degree of excess at the previous weekend’s Smoker.

The gross doubles saw Taylor & Murdoch tickling it round in a five under par score of 61, a fine total but not one to frighten the pack lined up close behind them. By chance, your reporter bumped into Taylor during his round as he stood aboard the 8th tee, crowing about a birdie barrage over the opening holes. Seemingly though they limped home from that point on, already feeling the pressure of winter league competition despite it being only the second weekend. One swallow does not a summer make, neither does a mere seven holes of decent golf.

Not to be outdone by Ian Shearer’s eagling exploits, Catherine Duncan won this week’s Ladies Stableford by virtue of an eagle 2 at the last. That’s just plain showing off but was necessary for her to win on countback over Yvonne Scott and Jackie Hunt, exhibiting the weakest of smiles as they ‘congratulated’ Catherine on her fine feat.