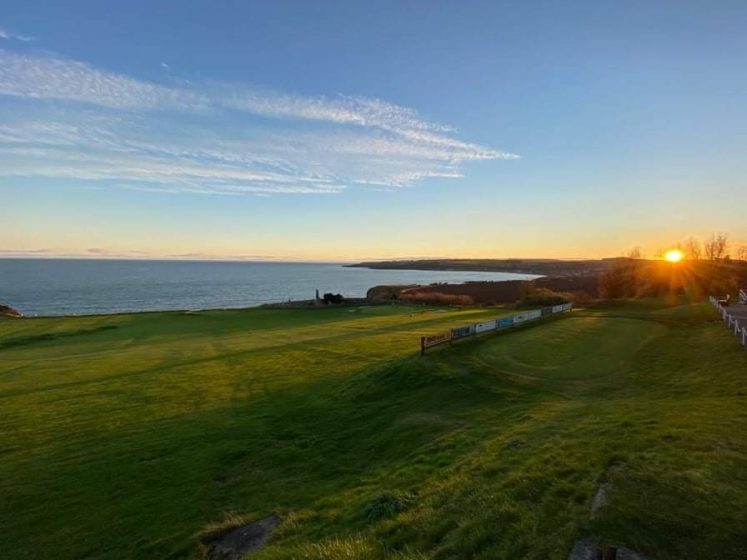 There was some splendid scoring once again at Stonehaven Golf Club this week, the winter leagues continuing apace. There are several Graemes at the club and between them they found it necessary to reduce the course to ribbons; Graeme Docherty winning the singles,  Graeme Adamson the doubles ( alongside Willie Pittendreigh) with Graeme McFarlane & Neil McArthur runners up.

It didn’t do any harm to be called Shearer this week either; Raymond winning Division Two of the Sweep and Ian finishing second in the Singles. It takes about a fortnight to change your name by deed poll apparently, not enough time for the rest of the membership to become Graemes or Shearers by the weekend, but they should be okay for December.

Performance of the week would ordinarily go to Craig Irvine & Fraser Stark for an incredible gross 57 containing nine birdies, a remarkable feat. However, there was an even more remarkable performance during Sunday’s play, observed by Russon & Cameron as they stood on the 14th tee, en route to a dismal 71. While sizing the hole up from an elevated vantage point, they looked down to Skatie Shore to discover a repugnant sight indeed. A backpacker’s tent had been erected, one which seemingly boasted no toileting facilities, and a bare bottom of sizeable proportions, owned by one of the tent’s inhabitants, revealed itself in all of its glory as its owner squatted to park her breakfast.

Understandably, the trio upon the tee lost all composure, each duffing their shots out of bounds while giggling like schoolchildren. Well you try hitting a golf shot when you’ve just witnessed a full moon, so to speak, in the middle of the day. Gregg, playing the course for the first time, shanked his ball in the direction of the culprit but, sensibly, refused to search for it. He won’t forget his ‘welcome’ to Stonehaven Golf Club in a hurry.

Mercifully spared the weekend’s vulgarity, the ladies competed in a midweek 12 hole Stableford and this was won at a canter by Morag Duncan. 31 points from twelve holes is fine shooting indeed. The Ladies annual prize giving was also held last week, Fiona Lamont once again wearing out the clubhouse carpet with her repeated walks to the trophy table. She’s been asked to wear slippers next year.