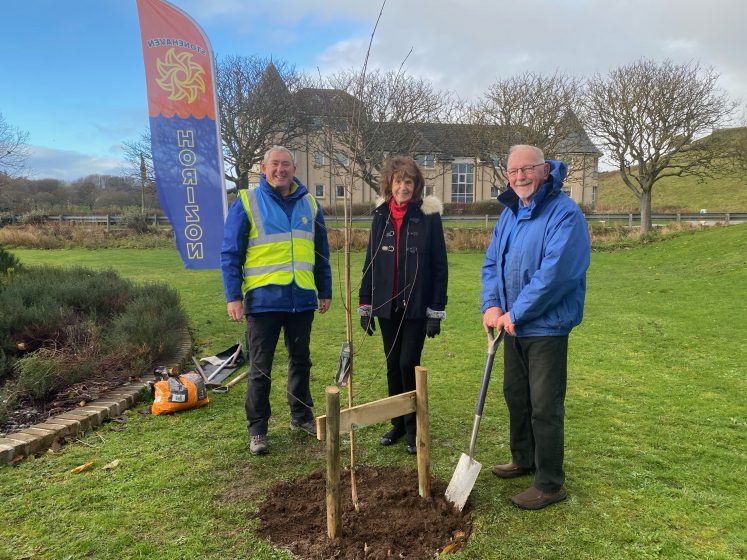 A SILVER birch tree was planted at the Queen Elizabeth Park this morning to commemorate Her Majesty the Queen’s Platinum Jubilee.

The planting was also undertaken as part of the national Queen’s Green Canopy Project – a tree planting initiative created to mark Her Majesty’s Jubilee with a lasting legacy for future generations in honour of The Queen’s leadership of the Nation.

Knowing of The Queen’s fondness for Royal Deeside and her beloved Balmoral, Lord Lieutenant Alastair Macphie selected and donated a Betula jacquemontii for Stonehaven’s tribute.

The tree now sits on the opposite side of the path from a Tibetan cherry planted by the Horizon Group in April 2012 to mark the Queen’s Diamond Jubilee. And it was Horizon founder member Allan Cairnduff who set to with a spade to plant this new addition.

Mr Cairnduff said he was very honoured to plant the silver birch on behalf of the Horizon Group and the Lord Lieutenant.

Deputy Lord Lieutenant Jennifer Macdonald supervised the planting of the nine-foot specimen. She said she was delighted to take part in what will be Kincardineshire’s last Jubilee tree planting – and she was happy the ceremony was undertaken during The Tree Council’s National Tree Week.

She added: ‘’It is also pleasing to be planting a tree this week after so many have been lost across the North-east due to storm Arwen.’’

Cherry trees a gift from Japan

Members of Aberdeenshire Council’s landscape services department assisted today by preparing the ground. And the team will be busy with more trees later this week when they tackle the planting of 110 ornamental cherry trees.

On Friday, volunteers from the Horizon Group, Stonehaven Rotary and the Men’s Shed will join school pupils to assist landscape services with the planting of the Sakura cherry trees in Mineralwell park.

The saplings have been donated by the Japanese government to commemorate the Tokyo 2020 Olympic Games. Of course, Covid got in the way and planting has been delayed for over 18 months.