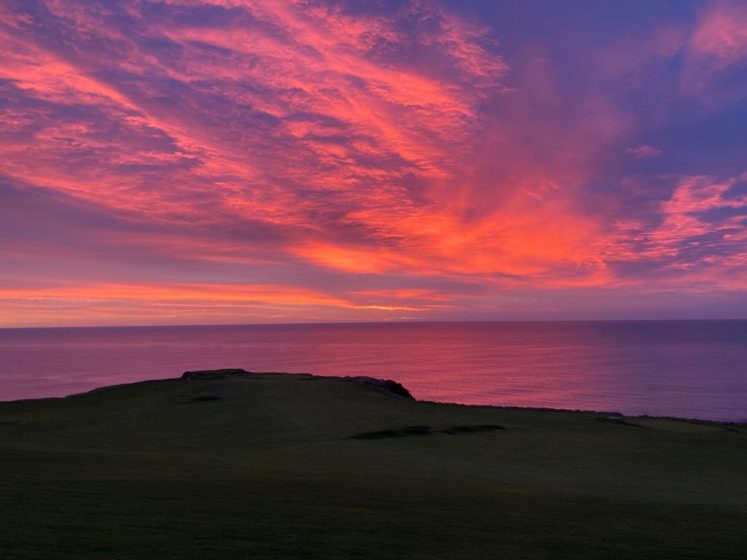 Check this out for a photograph! An absolute stunner from Gordon Adamson, looking out from Stonehaven Golf Club’s clubhouse last Saturday morning. For many reasons we’re blessed to be members of this club, not least for spectacular views like this to console us on those days when our golf doesn’t shine quite as brightly.

This beautiful scene was the pre-cursor to a challenging Saturday’s golf with the rain setting in alongside bone chilling temperatures. The Winter League was contested all weekend and Sunday’s competitors enjoyed the better conditions; cold but mercifully dry. The course is foreshortened during the winter with players teeing off from temporary mats positioned ahead of the summer tees. This lends itself to better scoring, despite conditions being more challenging due to the weather, and results were again impressive as a consequence (a backhanded compliment if ever there was one.)

Looking first at the Singles categories, The Ladies section saw Wilma Lawrence on top, not for the first time this season, recording 39 Stableford points to see off Catherine Duncan and the remainder of the field. The Men’s section was a much closer run thing though, the top three players each notching 41 points with Jacek Nowak winning on countback. The Singles scores duly accounted for, we move now to the Doubles sections, but this takes a little more explaining.

The Doubles format finds two players forming a team, their best individual score on each hole carried forward towards a team total. The best scores usually find the pair dovetailing as the round progresses, that’s to say if one player falters on a certain hole, or holes, his partner steps forward to pick up the slack. The key word here is ‘partner’, since there’s no ‘I’ in team as the saying goes. It takes two to tango, equally it takes two to represent a Winter League team, so it’s with a degree of disgust that the Scratch Doubles section found a hapless A Russon competing all alone while his partner, S Cameron, lounged in front of the television in his underpants. Cameron’s pitiful text to his partner, a mere hour before the commencement of play, suggested his daughters were ill and required his comforting presence at home. Subsequent investigations however found that the girls had nothing more than a sniffle and he’d in fact chosen a Match Of The Day re-run over eighteen holes of golf in the perishing cold. As a consequence, Russon was left to stagger to a single handed 73, his ‘team’ finishing last by some distance.

The previous day, C Irvine and F Stark played in markedly more benign conditions to notch a creditable 63 and triumph by two shots. Stark’s reported to have carried his partner all the way around the golf course, but at least his partner turned up to be carried despite the humiliation this affords. Perhaps Cameron can chew on that between now and next Sunday.

The nett category saw C Watt and S Crabb atop the leaderboard after a ten under par 56, incredible scoring yet still only sufficient to edge out the runners-up by a single stroke.