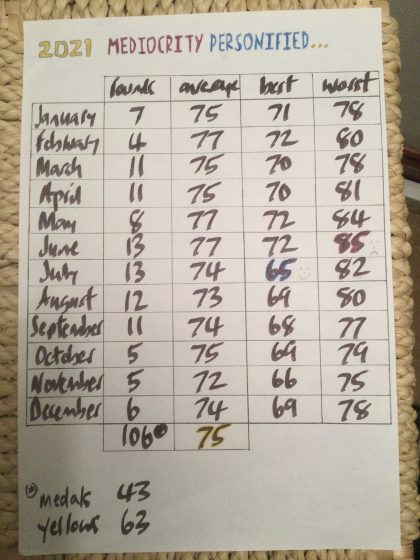 It’s the annual AGM at Stonehaven Golf Club this week, membership fees destined for discussion at some point. In an effort to assist members as they evaluate whether they get bang for their buck, I’m taking the trouble to share my 2021 statistics. Much of it doesn’t make for pretty reading but I’m prepared to forego my dignity to help you work out the cost efficiency of an SGC membership.

You’ll notice that as the year progressed I recorded every 18 hole score, I then sat down on New Year’s Day to analyse said results. My findings weren’t altogether heartening in terms of performance but very encouraging with regard to VFM (value for money). So it’s in a spirit of communal benefit that I share these findings, warts and all. I hope that, one way or another, they confirm your club fees represent money well spent.

First off, you’ll see I played 106 full rounds of golf, 40% off the medal tees and 60% off the yellows. That might sound a lot but in truth I’m bitterly disappointed, no self respecting golfing nerd should be playing only twice a week. I’ll be addressing this in 2022 and no mistake.

My average score during the year was 75, a mediocre nine over par. I effectively played par, bogey, par, bogey golf all year long, pretty uneventful stuff, but I loved it nonetheless. (It reminds me in some respects of my 150 match amateur footballing career in which, playing centre back throughout, I scored six goals for my club while also conceding six own goals. My football career was therefore neutralised. I’d have been better off staying at home to avoid injuries, disciplinary fines and harrowing pelters after each ignominious own goal).

But returning to golf, what terrific value for money I’ve had this last year at SGC and if you played as regularly as I did, you will have too. Assuming you played twice a week as a full member your golfing year will have cost as follows :-

And, perversely, I can announce that the worse your golf is the cheaper it becomes. Hapless duffers of the world unite, you have the last laugh when it comes to VFM. I can explain.

The Irvines and Riddells of this world, the ‘Billy Bigtimes’,  may think they’re being clever as they showboat their way to another level par total, averaging 66 strokes per round. But in reality the joke’s on them since such grandstanding equates to an outlay of 8p per shot as opposed to my 7p, or an 18 handicapper’s 6p. And if you’re playing to a handicap of 28, thereby averaging a score of 95, you’re paying only 5p a shot. Incredible value and one in the eye for the fancy dans shelling out thruppence more per shot as they swagger around the course as if they own the place. Being a rank bad golfer pays dividends, being a good one a fool’s game. I hope this revelation puts a different complexion on things next time you storm off the 18th having had a nightmare.

Conversely however, you might like to consider the following statistic, one which perhaps puts a fresh perspective on matters. In terms of an hourly golfing rate, someone playing 106 rounds of golf over a calendar year will have amassed 318 hours of continuous golf, or 13 entire days, regardless of whether they’re a good or awful player. This equates to £1.73 per hour. Now I don’t mind paying nearly two quid an hour if I’m finding fairways and holing rakers, but I’ll be blowed if I’m paying top dollar to honk the joint out with hooks, shanks and three stabs.

It’s a conundrum this good player v bad player dilemma isn’t it? Not one any of us have a choice about to be honest, you don’t set out to be rotten, it just happens, believe me. I’ll leave you to decide where you might fall on the spectrum between club champ or chump but one thing we’ll all be agreed on is that in our own individual way, we each revel in our Stonehaven Golf Club membership. Let’s look forward to another year of golfing VFM whether via NR’s or CR’s (course records).