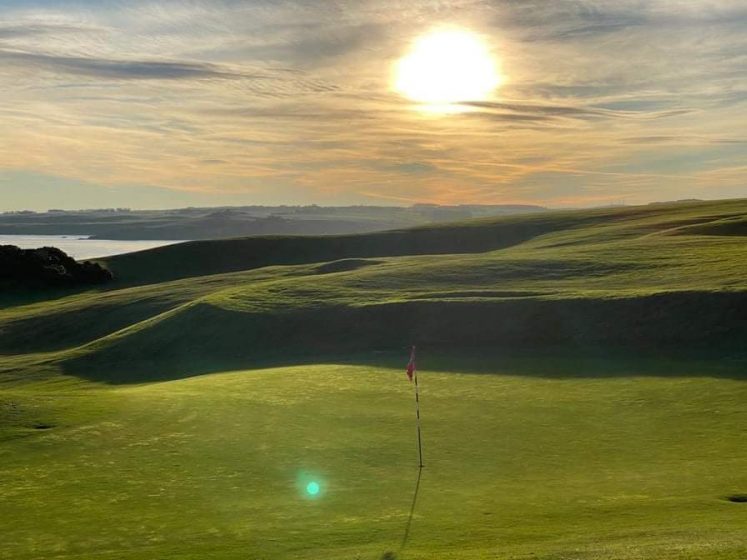 The flag was flying at half mast this week as Stonehaven Golf Club commemorated the passing of Stuart McKenzie. Stuart’s funeral was held on Wednesday before people gathered at the clubhouse in tribute to a club stalwart of many years standing. The course’s fairways and greens echo with memories of beloved club members who now rest in peace, not least memories of Stuart McKenzie.

The course remains on summer greens despite winter conditions, a welcome feature given many clubs spend the bulk of winter on temps. Before reaching these eighteen dance floors the fairways find themselves protected, but herein lies a conundrum. To save the fairways for the summer, you’ve to boot your ball to the semi rough or place it on a plastic mat. The mat option is a double edged sword in that it enhances the prospects of a clean strike but lures you into a false sense of security ahead of the summer season. It’s all very well floating pitches to the hole side from a plastic mat all winter, but once April ticks around it’s a different ballgame with those accustomed to using mats now haplessly chunking their pitches left, right and centre. Winter mats, they’re a false economy I tell ya, you’ll pay for it come summertime.

There were double helpings of joy in the Ladies section this week with two players winning the jackpot. Janet Owen’s name was picked out in the 100 Club prize draw, earning her a hundred quid, and Rose Menzies achieved her first hole-in-one with an ace on the 7th. Perhaps they can combine their respective successes, Janet paying for the drinks in celebration of Rose’s achievement? Congratulations to both of them regardless. Also in the Ladies Section, Catherine Duncan won the weekend winter league competition and Janet Owen (yes that woman again) the Stableford.

The Men’s winter league is well beyond halfway stage, 12 of the 20 rounds completed. Now’s the time for commitment levels to be tested as players (like myself), without a prayer of qualifying for finals day, question the sanity of ploughing on. But plough on we must, making up the numbers to form a veritable guard of honour for those who’ve negotiated the winter more adeptly than ourselves. And who knows, miracles can happen. Perhaps us also-rans have been saving our best golf for the business end of proceedings? Say that often enough and I might start to believe it.