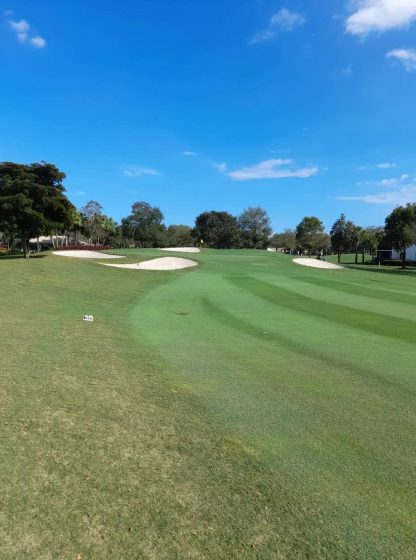 Planned your summer holiday yet? These brutal British winters are usually a good time so to do, a few strokes of the keyboard while on Skyscanner’s site and wallop, you’re all booked up. I planned mine while sat in my freezing Stoney flat last month, but in a fit of pique, brought the break forward from August to February. I therefore write this while topping up my tan in Florida (photo attached).

Before I ventured abroad, my winter league doubles partner (Scott Cameron) made a solemn oath, vowing to complete two solo rounds in my absence and recording scores that weren’t in excess of level fours, 72. Not a leaderboard threatening return but at least he’d notch a couple of rounds that offered an air of respectability. I regretfully find however that in only one regard has he fulfilled this promise. Granted, on neither weekend did he post a score beyond 72, but that’s because he’s proved a Grade A failure by registering an NR and a no-show instead. Reprehensible behaviour and conduct that threatens our continued involvement in the competition.

The NR I can just about tolerate given he’d topped one down the second before hacking his way to the 9th in over forty blows. His subsequent skulk to the clubhouse via the Roger Smith Walk Of Shame was perhaps understandable. But to simply refuse to log in to HDID on week two preferring instead to play a casual bounce game is quite beyond the pale. Here we are competing for high stakes in the SGC Winter League and he’s goofing around with his mates without a care in the world. When I finally shook Keith Douglas off as a WL partner a couple of years ago I thought my troubles were behind me, little did I know. It’s now down to me to retrieve the situation with a barrage of sub 60 rounds upon my return. I’ll say this, when we’re invited up to give the winning speech at the prize giving later this year it’ll be me clearing my throat I assure you, Cameron can sit still and lead the applause.

In terms of those who did pour out their competitive juices rather than leave them corked in a bottle for another day, a collection of familiar names were to be found atop the leaderboard. Alex Keith triumphed in the Singles, Catherine Duncan in the Ladies 18 holer and Rose Menzies in the 12. The doubles formats brought forth familiar names too, Brown & Halliday nurdling it round in a gross 63 while Callaghan & Summers netted a 58. Next week we’ll publish the aggregated scores as we reach the business end of the season, Finals Day’s likely protagonists are beginning to take shape. Not a pretty shape in some cases but that’s another story.

The Seniors 14 Hole Sweep wasn’t completed this week given ‘the field’ (holes 8-11) was closed for repair, ferocious winds sprawling timber hither and thither. A big thank you to all of those who took the trouble to help with the clean up operation, it’s much appreciated by the club. Perhaps S Cameron can take note of such admirable commitment when next offering to step up to the plate while his winter league partner enjoys a hard earned holiday. Had his attitude been adopted by members volunteering to make good the damaged field, we’d still be playing a fourteen hole course come the summer season. Some people.