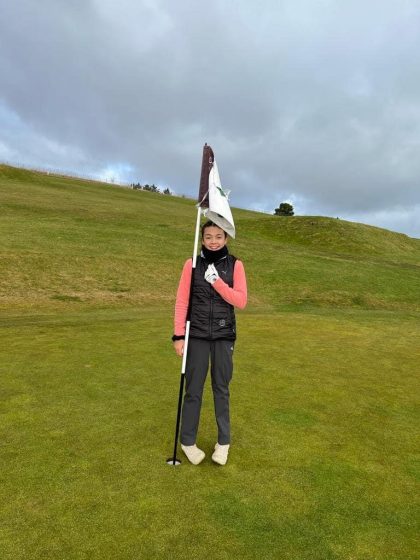 The winter league is approaching its last knockings with just four qualifying rounds remaining before the lineup for finals day is decided. In a month’s time the top 8 individuals from the Singles section and the top 4 pairings from the two Doubles sections will find themselves competing head to head for silverware.

To a layman such as myself, a myriad of variables seem to lie behind the calculations that decide which competitors progress to the final. The number of rounds played is a contributory factor, whether such rounds were played on fully qualifying weekends, what colour socks competitors were wearing. The various parameters and permutations I’ll gladly leave for others to explain, simple minds like mine aren’t cut out for such analysis. What I do know though is that in order for my partner and I to qualify for the gross doubles final a bye law will require passing which insists competitors record only bogeys, can recite the alphabet backwards and have an uncle named Bernard. It’s our only chance.

Best wishes go to all those competitors still in with a shout of qualification. Meanwhile us also-rans can look on from the sidelines while the fancy dans sweat like pigs over each putt until winter’s end. For our part we’ll dedicate the closing weeks of the winter league to pre-season training for the summer, honing our short games and updating our yardage charts. There’s a lot to be said for also-ran status you know, it offers a pressure free vacuum in which to exist while the serious golfers scrap over the silverware.

The Ladies Section enjoyed fine form last week despite testing conditions, Jayne Thurlow triumphed in the winter league with a creditable 36 Stableford points and Fiona Armstrong won the 12 hole version with 27 points. Please also note when looking at the winter league standings below, that the ‘F’ before Lamont stands for ‘Fiona’, she and her husband sitting third in a field of 17 pairings. To cap an excellent week’s ladies golf, and in a display of outright showboatery, the threeball of Fiona Currie, Jane Kennedy and Liz Powell each took the trouble to birdie the 6th under the gaze of onlooking captain, Fiona Sim. There’s sooking up to the teacher and there’s plain showing off. And not to be outdone, junior girls member Holly McKenzie (pictured) notched an incredible hole-in-one on the 2nd, one of the course’s toughest holes. Well done Holly, a fantastic feat at the age of just eleven!

Finally we report another splendid week’s golf from the Seniors Section, dozens of doughty souls competing in the 14 Hole Sweep. The Seniors are divided into three divisions according to handicap status and each division was won with a 32 point haul, the winners being Colin Arthur, Peter Nellany and Bob McAlpine.

So to the results. The Winter League standings below show player’s average scores over their best eight qualifying rounds so far. If the show was to stop today these would be the finalists, however it’s anticipated that ten qualifying rounds will be accomplished so there’s still a chance for those further behind to come up on the rails. For further explanation you can have Chris Taylor’s mobile number, he’s available each night between midnight and 4am, otherwise you can approach him during his backswing on the first tee, he’ll understand.

72 participants. 5 other individuals stand a chance of qualification but need a fine finish if they’re to muscle in.

7 pairs participating. The top four are pretty well nailed on unless course records are set by the chasing pack from here to season’s end.

17 pairs competing. Three other pairings remain in the hunt since they’re within a stroke of fourth position but need to jog on if they’re to seriously threaten.