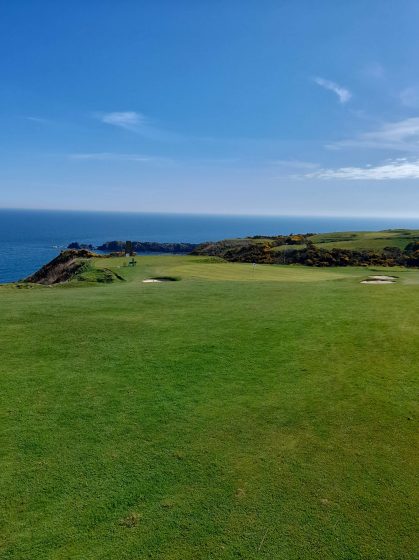 Over £200 was raised for the Marie Curie charity this weekend as SGC members competed in Saturday’s Stableford event. The weather was superb leaving early starters to rue their selection of long legged breeks over shorts, cool air giving way to warm sunshine not long after breakfast time had passed.

Impressive scoring matched the impressive weather, the top two competitors amassing 44 points apiece. John Neal pipped John McMenemy to the post thanks to a better back nine, the latter having slightly sullied his card on the 16th hole. Spare a thought for Simon Mitchell who’s PB (a round of 71), containing no fewer than three birdie 2s, earned him merely a bronze medal. He can be consoled at least by the trousering of a healthy proportion of the 2s pot.

Performance of the week though must go to the splendid quartet who represented the club with distinction in the prestigious inter-club Maitland Shield knockout competition. They came agonisingly close to winning the tournament, defeated only in the grand final by the hosts, Newmacher, who made the most of home advantage. Hats off to Kevin Murdoch, Ian Taylor, Kiefer Brown & Fraser Stark for a splendid achievement given the quality of the opposition throughout the event.

The Junior coaching continues apace on Sunday afternoons, it’s always good to see youngsters getting into the sport. We hope they follow up by joining existing members of our Junior Section, some of whom competed in their weekend Medal with Alana Henderson triumphing by a stroke over Thomas Dingwall.

The Ladies section have been busy with several events contested lately in a number of formats. Fiona Sim can claim Ladies player of the week status having won Division 1 of the individual Medal and partnered Jayne Thurlow to secure the Coronation Foursomes. And with Alana Henderson winning the Junior Medal, the Ladies section can look forward with anticipation at the next potential starlet to join their ranks.